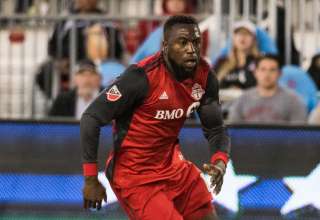 OK, kids, gather round, I’ve got a story to tell.

Back in the day, when Toronto FC was a brand-spankin’ new team, it developed a rivalry with, of all teams, the Columbus Crew. There was no rhyme or reason to it; if you look in the history books, there is no mention of the great Columbus/Toronto war. And, honestly, before TFC was a thing, if you’d have asked anyone in Toronto to name a city in Ohio, that person would have said either Cleveland or Cincinnati. OK, maybe a Rick Nash fan or two would have said, yeah Blue Jackets and all that.

But, in those early years, boy did TFC fans dislike Columbus. They went down en masse to Crew Stadium, and there were incidents with the police. There were wars of words and cameraphone videos of a fan allegedly being zapped with a Taser.

And the Crew was so darn easy to hate; it was one of MLS’s best teams, while TFC was the worst.  The Crew’s star was everything that was wrong about soccer; Guillermo Barros Schelotto, who was a pretty damn good player when he could bother to stay upright.

Then the Montreal Impact came into MLS and, well, the whole Crew rivalry/Trillium Cup thing faded. Columbus became just another team. And, late in 2017, the Crew became an object of sympathy. Sympathy!

But there are TFC fans of a certain age, you know, the ones with the grey beards and missing teeth, who will remember a time when black and yellow were hated hues. Kinda like how older Toronto sports fans will recall the Detroit Tigers were a far more hated rival during the Blue Jays’ glory years than the Red Sox or Yankees. Heck, nowadays there are Jays fans who actually don’t mind the Tigers. Weird. You all need a remedial course in “why Alan Trammell and Lou Whitaker and Kirk Gibson are baseball’s worst people.”

For those who remember when the Crew were hated, Wednesday night’s Eastern Conference Final 1-0 win over Columbus should have been sweet. But, heck, Crew owner Anthony Precourt had to ruin everything by making plans to relocate the Crew to Austin. Now, everyone in soccer feels sorry for Columbus. It’s #SaveTheCrew this and #SaveTheCrew that. You almost feel like you have to apologize for beating the Crew. Rubbing their faces in it feels wrong.

That isn’t fair. If you beat a rival, you want to be able to gloat. If the Crew are soon to leave for Texas, the elder TFC fans should be able to toast knocking Columbus out of what might be the last truly meaningful game that version of the franchise is  going to play. Sure, it all depends on what happens next year, but what if the Crew becomes a lame-duck franchise? This could very well have been its last kick at playoff-glory can.

Look, it’s only fitting, that after all the misery the Crew heaped on TFC during the Reds’ early years, that the favour would be returned.

In the first half, TFC made the home fans very nervous, with Victor Vazquez telegraphing a penalty kick, allowing Zack Steffen to make the save. Those slow run-ups, like Vazquez employed (and I really shouldn’t have called it a “run”-up, should I?) can give a patient keeper that extra second to see if the shooter’s body closes or opens up. The way Vazquez closed his body to the goal, it was easy to see that he was going to pull his shot across his body.

Vazquez was bailed out. Despite nursing a bad ankle, Jozy Altidore got the winner in the 60th minute, after taking a pass from Vazquez that sprung him into the penalty area. Vanney likened Altidore to Keyser Soze; limping one minute, running the next. Nice to see TFC itself keeping the league-bad-guy thing going. Good on Vanney to jump on the TFC-as-villains bandwagon.

“I knew I couldn’t continue,” said Altidore. “I had a problem with this ankle at the beginning of the year.  I just knew obviously it’s not a long term thing but I knew that I would have trouble continuing at the level we needed.  I also wanted to give whoever was coming on potentially a little time to get ready.  I knew that if I get a chance to make a play that I wanted to be on the field for it and it all worked out in the end.”

But the most important part of the sequence came when Sebastian Giovinco, who may have been the shortest player on the field, was able to knock down and control a ball despite being surrounded by three Crew defenders. Losing a battle to Giovinco when the ball is on the ground is, well, expected. But, losing an aerial battle to him, well that’s unforgivable. Giovinco controlled the ball, got it to Vazquez, and the Crew-killing sequence had begun.

And the Crew had chances to get that road goal. Just as they squandered chances in the home leg, Columbus’s players put on a second-leg clinic of how not to finish. Just before the Vazquez penalty, the Crew were off on a two-on-one break. The ball was squared to Justin Meram, whose first touch was so awful, by the time he tracked down the ball, TFC’s Michael Bradley was able to get back and break up the play.

And, with just a couple of minutes left, Ola Kamara was open at the far post and would have put the ball in the open net, should have put the ball in the open net, but squandered the chance. Somehow, Adam Jahn’s flicked header found Kamara at the back post, but the Crew striker found a way to contort his body so the ball went through his legs. Like, it took dodge-ball kinda skill to find a way to actually not make contact with the ball.

Wait? I’m being too mean to the Crew? Come on, for one night, it’s OK to pile on, TFC fans. Get back to the #SaveTheCrew stuff when the season’s over. In a way, the best way to remember the Crew is to see them as the rivals they once were. Being nice to them patronizes them, it makes them less of a team.