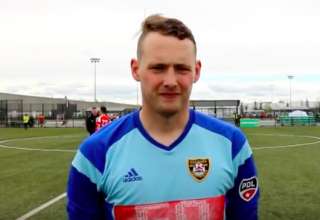 Canadian goalkeeper Dylon Powley, a Grant MacEwan University graduate who spent two years with Calgary Foothills of the PDL, will soon know what it’s like to be the most loyal of restaurant eaters.

In January, Powley will move to the Swedish island of Gotland, home of fourth-tier side FC Gute. He will begin his one-year contract with the club. His contract calls for him to eat at the same restaurant — which is one of the club’s sponsors — daily. A meal plan will be submitted by the club.

Gute was the third of what had been four planned Swedish-club trials for Powley. But the team, which employed Foothills alumnus Tyrin Hutchings last season, ticked off the boxes for the young Edmonton native. The team finished fourth in the fourth tier last season, and manager Jens Wedeborg has hopes for the team to move up in 2018.

“They had a brand-new coach, and he still hasn’t had the time to implement his vision,” said Powley, who is back at home in Alberta for the holiday season. Wedeborg came in last season, and managers need time to put their stamps on the clubs they inherit.

And Powley said that his conversations with his manager have him hopeful that he’s going to have the No. 1 shirt coming out of camp.

“He told me that they weren’t going to go to all the trouble of bringing me halfway across the world to have me sitting on the bench,” Powley said.

Powley had a goals-against average of 1.07 in 14 games for Foothills last season.

He’s excited for the move to Europe, but it’s one that, this season, more young Canadians will have to make. With FC Edmonton discontinuing operations, Canada loses a division-two side. The Whitecaps have folded their USL side and will instead affiliate with a team in Fresno. And the San Francisco Deltas, who had a Canadian coach and employed more Canadians than many pro teams north of the border, called it quits after one NASL season.

That means the job market for young Canadian players is much smaller.

“It’s frustrating for a lot of Canadians,” said Powley. “In a town of Europe that has 10,000 people, there’s support for a club. That, in a city (Edmonton) of more than 1 million, that we couldn’t fill a stadium, for those who want CanPL to happen, that’s a wake-up call to everyone.”

Powley said, ironically, that Gute’s home stadium reminds him a lot of his hometown Clarke Stadium; with the older stand on one side and the bigger grandstand on the other. Their capacities are similar, too, with Gute able to max out at about 5,000 fans — which is the club’s largest recorded home attendance.

But, after playing in the Canadian university and then PDL ranks, Powley is prepped to make the next step as a professional.

“I want to either help this team advance and make the move up, or use this as the opportunity to improve and then get an opportunity elsewhere.”