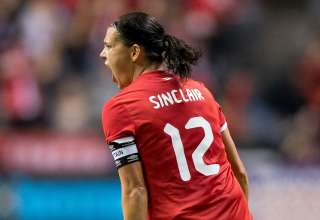 Canada’s national women’s team came back from a 2-0 halftime deficit to beat Norway 3-2 . But, let’s face it, Canada gifted Norway a couple of goals in the first half of their Tuesday night friendly in Marbella, Spain. Then, Norway gave it all back and then some, with a series of shocking mistakes and missed marking assignments.

It was the kind of game that coaches will shudder to watch, though it was fun to see all the goals.

The game started with the Norwegians pressing the Canadians, and earning a series of corner kicks. The fifth Norwegian kick was the charm. Kristine Minde’s delivery came awfully close to the Canadian goal, but keeper Stephanie Labbe couldn’t claim it. Norwegian defender Ina Gausdal was alone at the back post to put it in.

Then, a series of errors helped Norway double the lead. Midfielder Sophie Schmidt left a back pass awfully short for centre back Shelina Zadorsky. The Canadian defender rushed to get it, but then presented the ball to Norway’s Caroline Graham Hansen, who smashed the ball into the Canadian goal.

It was the worst half Canada has played for a while. You’d have to think back really hard to remember when Canada was as poor as it was in the first 45 in Marbella.

But, in the second half, it was Norway’s turn to treat the ball like a hand grenade.

Keeper Cecilie Fiskerstrand whiffed on an awkward back pass, allowing the ball to go right to Christine Sinclair. Canada’s all-time leading scorer put it in the open goals. Of the 169 international goals Sinclair has scored in her career, that one will go down as one of simplest to finish.

But Norway wasn’t done giving away the ball. Another dreadful error in the back, a weak pass from the fullback, allowed Janine Beckie to have a look at goal and beat Fiskerstrand with an effort from outside the penalty area.

Canada got the winner when Maegan Kelly’s good low cross found sub Adriana Leon, who had burst into the penalty area. In short order in the second half, Canada (with a lot of Norwegian help) turned what looked to be a dismal Spanish evening into a salvage job.