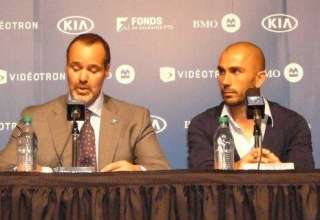 Marco Di Vaio, the Montreal Impact’s first Designated Player, has been in town for less than 24 hours. But if the reception he received when he emerged from the secure area of Dorval’s Pierre Elliot Trudeau Airport Sunday night and the plaudits that were tossed his way at Monday afternoon’s press introduction are any indication, he might just be able to cross the St. Lawrence River on foot in the summertime.

A crowd of supporters, close to 200-strong broke into cheers, chants and Italian a capella at his appearance at the airport. And the former Serie A standout spent next 10 cacophonous minutes signing autographs as he made his way to the waiting transport with the majority of the crowd trailing behind, in full voice the whole way, through the terminal and outdoors to the rented van, where Di Vaio joined his wife and two young daughters.

Di Vaio mentioned it early in his comments to the press this afternoon. After thanking the Bologna club for making the move possible after four years in their colours, two as team captain, he declared (with Technical Director Nick De Santis acting as interpreter): “I haven’t done anything for the team yet and I get this kind of welcome. I never expected that. I didn’t think I was coming to a world of soccer like this.

“I understand my responsibilities though and I certainly want to help the team to grow, in quality, in experience and I also know that they brought me here to score goals. It’s what I have done my whole career and I’m excited to take up this new challenge. It’s exciting to be part of a new team that has to grow and grow together. I want to be a part of it, not only as an individual but as part of the collectivity,” he continued.

As to the reasons for deciding to take a chance on this side of the Atlantic, Di Vaio mentioned that while there were a number of Italian clubs interested in his services. He scored 65 times in 143 appearances at Bologna but decided that it was time to make a change, one that also affords his daughters the opportunity to learn two new languages. The family intends to spend the great majority of the next 18 months in La Belle Province, enrolling their kids in local schools with only a possible trip home during Christmas break on the agenda at the moment.

This being their first trip to this part of the world, the Di Vaio do not know a whole lot about their new home but the learning curve has trended upward..

“I know the hotel, two restaurants, where we ate last night and this morning,” Di Vaio declared to a chorus of chuckles. “It’s going to be an interesting experience. Montreal is an international city but I know that it is different from any of the other cities I’ve lived in and I’m looking forward to my time here.”

The Impact’s new No. 9 mused that, at 35, Montreal will probably be the final stop in his playing career but followed the comment up with the caveat, “That’s what I said in Bologna too.”

Head coach Jesse Marsch, looking on for most of the 40-minute, trilingual session, was asked for his impressions.

“For our team, I think he’s the perfect fit. We need someone in the attacking third that can really make sense of things and ultimately score goals. The person that Marco is, I think, can’t be remiss either because he has shown such great interest in being here. He’s already talked about how important it is to be part of a club and what that’s meant for his experience at Bologna and I know that he’ll add to us in that way, which I think is extremely important and can’t be forgotten,” he said.

“We’re all excited about Marco and we know he’s going to make us a better team. There’s no question about that but we don’t want to put the weight of the world on him. We want him to fit in, in all the right ways, and know that he’ll make us stronger and know that he’ll score goals but we don’t want to put crazy expectations on him because it’s not fair to anyone and I think that in the end he’ll prove everything he’s worth to our group.”

Team owner Joey Saputo, asked what was going through his mind, admitted to feeling somewhat relieved.

“I guess there’s a certain amount of pressure off my shoulders because I promised a Designated Player and here he is,” said the Impact president.

“Now the pressure is on their shoulders,” he continued, indicating the other men on the panel alongside him before casting his memory back to the club’s founding 18 years ago and declaring, “The ride’s been great but it’s still not completed. We still have a lot more work to do. “