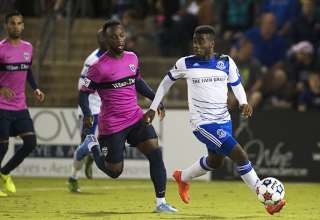 There have been some bizarre games in FC Edmonton’s history. But Saturday’s 3-2 loss to Jacksonville deserves to rank right up there with the heartbreaking injury-time defeats to Montreal and Vancouver in the Amway Canadian Championship.

“It gives a run to Canada-Martinique, that’s how disappointed I am,” said FCE coach Colin Miller, comparing this match to the 2013 Gold Cup shocker when he was the interim coach of the Canadian national side. “Disappointed would be an understatement. It was criminal defending on all three goals tonight. If we defend like that, we deserve to lose.

“There will be changes next year.”

At minute 65, the Eddies’ Sainey Nyassi went in alone and scored to give the Eddies a 2-1 lead over the Armada, who were down to 10 men. You would have been forgiven for thinking that, a man down and a goal down, the jig was up for the Armada.

But, within four minutes of the Nyassi goal, the Armada hadn’t just equalized, the home side had taken the lead.

Remember that the Eddies gave up a goal 12 seconds into the match in their NASL season-opening loss in Jacksonville. But Saturday’s game, with the Eddies badly needing a win to fan their fading playing hopes, might have surpassed that in infamy.

“We show great character to take the lead, and then we absolutely fall asleep and give two goals away,” lamented Miller.

In the 67th, fullback Johann Smith was ruled to have brought down Jacksonville’s Akeil Barrett in the Eddies’ box. Pascal Millien stepped to the spot and place the penalty in the corner to ties the game.

Two minutes after that, Armada forward Jemal’s Johnson was blocked, but it deflected right to Barrett, who was unmarked and onside in the Eddies penalty area. He finished with ease.

The Eddies, at that point, were playing with only three natural defenders. That’s because, when the score was 1-0, Miller pulled off fullback Allan Zebie so he could go with a more offensive setup. To remain in the playoff race, the Eddies knew only a win would do. And, when Jacksonville’s Alhassane Keita — scorer of the first-half opener — got his second yellow in the 51st, Miller decided to bring on attackers Pablo Cruz and Frank Jonke. He sacrificed Zebie and midfielder Ritchie Jones.

Cruz and Jonke made an instant impact against the 10-man Armada. Three minutes after both came on, Cruz made a run to the end line and then played the ball into Jonke in the box. Jonke had his back to goal, but was able to turn and get a shot off; the ball crashed off the post, then off keeper Miguel Gallardo, and then laid there right in front of goal. Daryl Fordyce poked the ball into the open net.

That set off a crazy 10-minute sequence that saw the Eddies take the league, then give up two goals.

After the Eddies went down 3-2, they huffed and puffed and huffed and puffed to try and get the equalizer — and more. A deflected Dustin Corea shot crashed off the post. A headed effort by Jonke forced Gallardo into a remarkable diving stop. And, Armada defender Matt Bahner cleared a Corea effort off the line.

But make no mistake, no team that’s up a man, up a goal — and then gives up two — has the moral right to curse its bad luck.

It was also the eighth time this season that the Eddies were without leading scorer and assist man Lance Laing because of Jamaica duty. He didn’t get back in time from Jamaica’s Tuesday friendly in South Korea to play in any part of the three-game road trip that ended 0-3-0. In the eight games he’s missed, the Eddies have earned a grand total of five points.

If there’s any better argument on why Laing deserves league MVP votes, find one.

But, Miller said that, while the Eddies were beaten by a better team — the Cosmos — to start the road trip, FCE’s poor defending cost dearly in two winnable games in North Carolina and Jacksonville.

And, judging by the coach’s tone, this road trip might have sealed the fate of some players on this squad.

The Eddies trail Fort Lauderdale by three points for the fourth and final playoff spot in NASL. But the Strikers have three games left to play. The Eddies have just one left, next Sunday’s home date against Jacksonville. Fort Lauderdale’s goal difference is +10; the Eddies are just at +1. And the Eddies are two points behind fifth-place Tampa Bay, which has two games left on the schedule.

So, not only do the Eddies need the Rowdies and Strikers to lose out the rest of the way, they’d need to beat Jacksonville by a significant margin next week to put some kind of bite in goal difference.

But, it could be that, by the time the Eddies kick off next Sunday, they’ll have been eliminated from post-season contention.