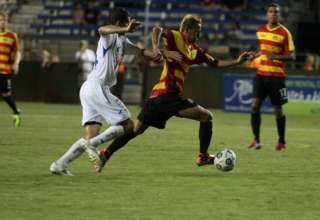 After three ties in past meetings, tonight’s match between Montreal and Fort Lauderdale held the 2011 head-to-head record between the teams in the balance, and with that came the opportunity for either team to make the most of a six-point game.

An Impact victory would make the team a bona-fide playoff contender, slipping the team ahead of their hosts into the sixth and final slot, if only until next week’s action.

A Strikers win would leave them in fourth place pending the outcome of tonight’s other NASL action, six points ahead of their visitors with only four scheduled games remaining.

A tie would simply muddy the waters of an already messy NASL table, extending the uncertainty for another week as five teams jockey for the four slots available for the opening round of the postseason.

As it turned out, things went a lot better for the Strikers than they did for the Impact. The teams avoided a third sister-kissing result with the home side coming away with their desired result in a 1-0 contest.

At the end of the night, FC Edmonton went to fourth with its win over Minnesota, and Fort Lauderdale finished the night in fifth. Montreal trails Minnesota by four points for the final playoff spot.

The first 15 minutes featured tentative play as neither side attempted to mount a serious attack, each preferring to invest some time feeling the other out. When the chances came, they largely served to showcase the talents of Evan Bush, who came through under pressure as he has since stepping in for Bill Gaudette, and made four saves

Ft. Lauderdale forward Brian Shriver took a 17th minute pass from Bryan Arguez, spun around a Montreal defender and drilled a shot that Bush swallowed up. In the 36th Bush made another save on the Fort Lauderdale midfielder, diving to his left to make a fingertip save to send a low shot wide. A minute after that save he nullified an attempt, this one by Leopoldo Morales.

The offence limited by the strategy of an opponent that kept the ball away from key players, central midfielders Ian Westlake and Sinisa Ubiparipovic, Montreal managed a single viable try. It came in the 26th minute off the boot of Ryan Pore, who took all three Montreal shots in the opening half.

The Impact midfielder’s arcing shot from the corner of the penalty area eluded a diving Matt Glaeser and rattled off the crossbar just inside the right hand upright.

The second half opened with Ubiparipovic announcing his presence with a six-metre point blank try that let Fort Lauderdale keeper Glaeser show his stuff. It would prove to be the Impact’s last opportunity to bury one although forward Mignane Diouf, whose media profile has been significantly raised in recent days for matters unrelated to soccer, lost a foot race to a loose ball with Glaeser in the closing minutes that could have resulted in a tie if he had been a half-step quicker.

The Strikers controlled the bulk of the play as the game progressed. In the 67th minute midfielder Arguez drove down the right side, blew past three defenders, crossed in front of the net and sent one in on net from 30 metres that Bush, the NASL’s stingiest keeper and owner of a 0.89 GAA going into tonight’s match, managed to handle.

Four minutes later the home side scored the only goal they’d need when midfielder Gerson Mayen passed back to Mike Palacio. Palacio’s immediate and precise return pass, one that came awfully close to being offside, confounded the Impact defenders and found Mayen alone in front.

The Striker midfielder tapped the ball in to the right of the keeper and had his success greeted by audible appreciation from the crowd of 2,477 and an explosion of streamers with redoubled drum rhythms coming from the small but vocal group dubbed the Striker Likers.

Shriver missed doubling his side’s score in the 83rd minute but his shot, from virtually the same spot as Mayen had struck from, rolled harmlessly to the right side.

The Impact’s next game is on Wednesday against the Puerto Rico Islanders.

THROW-INS: Impact defender Simon Gatti, who became the first Montreal player to start 20 games, also leads the team in total playing time with 1773 minutes under his belt so far this season.

• Montreal keeper, Bill Gaudette, who appeared in nine games before his ankle injury on June 12th was dressed and available for tonight’s game.

• Fort Lauderdale was without the services of defender Cristian Arrieta, off to wear Puerto Rico’s colours in a pair of FIFA World Cup qualifiers but could have called upon their leading scorer, Eduardo Coudet, recently returned from a six-game suspension.