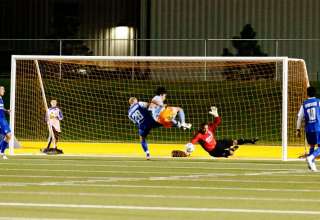 FC Edmonton beat the Stars 3-1 at Foote Field Saturday, putting the Eddies only one point behind FC Tampa Bay for third place in the standings and, more importantly, eight points ahead of the Montreal Impact for a playoff spot.

After a sluggish first half which saw the Eddies fortunate to only be trailing the visitors by a single goal, FCE scored three unanswered goals in the second half. The winner came from Shaun Saiko, who latched onto a long clearance from keeper Rein Baart that bounced behind Minnesota defender Cristiano Dias.

“If we want to make playoffs, we have got to get efforts like we did in the second half,” said Saiko. FCE has three games left on the schedule, including a home date Wednesday to the last-place Atlanta Silverbacks, who have lost all three of the previous meetings with the Eddies.

But, the game’s turning point happened just after Saiko scored to give Edmonton the lead. Minnesota began pressing the Edmonton goal — and a cross came into the FCE area. With central defender Paul Hamilton suspended, the home team missed the general’s presence in the back. The ball pinged around in the area. Baart made an outstanding save, stretching to deny a ball poked towards goal out of the scrum. But the rebound came from Walker, who only had to tap in to an open goal from two yards out. Somehow, his sidefooted effort corkscrewed wide of goal.

That miss set the stage for Dan Antoniuk to score the insurance goal, set up after midfielder Ilja van Leerdam pounced on a Minnesota giveaway.

The game didn’t start well for Edmonton. Coming back from Puerto Rico, where they had just played two games, the Eddies were only able to get a Friday training session ahead of the match.

Minnesota came out with a very aggressive stance, pressing FCE all over the pitch. The Stars took time and space away on the small Foote Field pitch, and the home team couldn’t find a rhythm. Meanwhile, the Stars kept pumping crosses into the penalty area, hoping their tall, physical strikers could take advantage of Hamilton’s absence.

There were warning shots. Twice, striker Brian Cvilikas had open headers miss the target, one coming off a corner kick in which he cleanly won the ball.

Right before the stroke of halftime, Cvilikas was left wide open, and he rose to meet the ball. This time, he didn’t miss.

“We started off pretty badly,” said FCE assistant coach Dave Randall. “We kept giving the ball away. We didn’t win a header.”

But, the Eddies came out for the second half and looked nothing like the team that played the first half.

Eddy Sidra, who started at left back, had to come out after being knocked down over and over in the physical first half — and he left the pitch with a limp.

Where there was no space in the first half, huge passing lanes opened for the Eddies. Within seven minutes of the restart, the lead that the Stars had worked so hard through the first 45 minutes to earn was gone. Kyle Porter sent a perfect cross into the box for Kyle Yamada to nod home.

“We knew we had to come out with better energy,” said Saiko.

Then, Baart was able to collect off a Minnesota set play. Knowing that the defenders were still scrambling back after coming up for the attacking sequence, Baart dropped the ball over Dias’ head. Saiko ran onto the bouncing ball and went in alone on Minnesota keeper Joe Warren, and slotted home the winner.