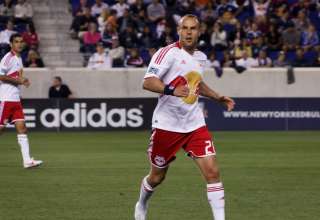 No wings tonight, as a dose of the Red Bulls found Toronto FC crashing quickly back down to earth.

After pulling off back-to-back wins over Vancouver Whitecaps and a third straight Nutrilite Canadian Championship last week, Toronto unraveled on Wednesday night in a 5-0 loss to New York at Red Bull Arena. This was the second time this season that TFC allowed five goals or more in a game and was also clean-sheeted for the ninth time. The Reds continue to look for their first road win of the year.

Of course, it’s the same scoreline as the final weekend of the 2009 season, when the then-last place Red Bulls beat TFC by that score to eliminate the Reds from the playoff race.

Meanwhile, New York padded its stats and built up the squad’s confidence in the blowout win — only the second in its last 12 MLS matches. By the end of the game, it looked as though the Red Bulls were just toying with TFC, making the Reds chase the ball in an intricate game of keep-away.

The match mercifully ended for Toronto with only five goals against but could have easily been more.

With the convincing effort, the Red Bulls moved to the top of the Eastern Conference. Joel Lindpere, who was just named MLS Player of the Week, was the man of the match scoring a goal and adding two assists.
Toronto was still sporting a depleted lineup with midfielder Julian de Guzman and captain Maicon Santos not even making the trip to New York. Both aggravated injuries in the NCC final on Saturday. Alan Gordon and Jacob Peterson were available off the bench but with game out of hand they did not see action as Toronto plays in Houston on Saturday.

Tony Tchani was back in the starting lineup after coming off the bench on the weekend but he was taken off in the second half after a poor outing. Danleigh Borman was equally ineffective and was substituted off as well. Both players made their return to New York after being traded to Toronto on April 1 in a deal that sent Dwayne De Rosario the other way. This match was supposed to be the first time that TFC would play against its former captain but he was traded to DC United for midfielder Dax McCarty on June 27.

Red Bulls Exploit Porous Defence
Believe it or not, Toronto did play well for the first 30 minutes and managed to create chances through Joao Plata and Nick Soolsma. Both players have been playing with confidence of late, but were thwarted each time by Canadian goalkeeper and former Red, Greg Sutton.

However, the Red Bulls slowly overpowered the Reds and broke down the backline, exploiting gaps and poor positioning. The Red Bulls took advantage of a bad five-minute spell in the first half by TFC and scored twice to build a lead.

In the 33rd minute, Jan Gunnar Solli, on the right flank, put a cross into Thierry Henry after it missed a trio of players. The French striker was all alone. He made no mistake, easily slotting the ball past TFC keeper Stefan Frei to give New York the 1-0 lead. Richard Eckersley and Ty Harden both elected to cover Luke Rodgers and the cross passed all of them and went onto the feet of Henry. Simply put, it was awful defending by Toronto.

Just over five minutes later Solli was at it again, as he found space and was able to walk in unchallenged. He then passed off to Rodgers, who, with his first touch, bounced the ball up. While in the air, he fired a brilliant strike past Frei to increase New York`s lead to 2-0.

If Plata or Soolsma had converted on their chances early on this game would have been very different. With the Red Bulls up by two goals New York was able to settle into a rhythm and keep Toronto chasing the ball.

In the closing moments of the first half, New York almost made it 3-0 but the goal was disallowed. Lindpere took a fre ekick from the right edge of the box and sent it straight at goal and into the back of the net. However, the goal was called off by the referee, who ruled Rodgers had interfered with Frei.

In the 52nd minute, TFC had a great chance to cut the deficit in half when Plata turned playmaker and set up Javier Martina in the middle. However, the striker turned and fired the ball off the post.

Seconds later, the Red Bulls countered with Dane Richards dribbling the ball on the right side before passing off to Lindpere in the middle. He went straight at TFC defender Ty Harden and tucked the ball in just inside the left post and out of the reach of Frei. With that, the rout was on — better luck and this could have been a better game, but once again poor defensive coverage led to yet another Red Bull goal.

New York added two more goals before all was said and done. In the 56th minute, substitute Juan Agudelo soared through the air to head the ball well over a lunging Frei to make it 4-0.

Then, to add insult to injury, the Red Bulls added a fifth in the 89th minute. Harden cleared the ball onto the feet of Lindpere, who got the assist after Agudelo made no mistake by burying the ball past Frei again.

Luckily Toronto won’t have too much time to dwell on this dreadful loss. The team will now travel to Houston to take on the Dynamo at Robertson Stadium with kickoff at 8:30 p.m. ET. The Reds previously defeated Houston 2-1 in Toronto on May 7 and will need a much better effort if they have any hope of repeating the feat.