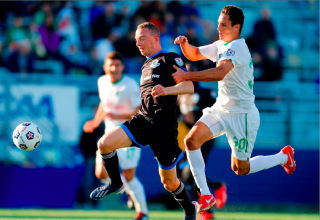 David Proctor ruined the party. And he made a soothsayer out of his manager.

The New York Cosmos were just a few short minutes from clinching the NASL fall season title, nursing a 1-0 lead. But FCE’s Scottish defender headed home a Lance Laing corner in the 90th minute, giving the Eddies’ a 1-1 draw in Uniondale, N.Y.

Proctor’s goal allowed the prophecy of his coach, Colin Miller, to come through.

“I knew it was going to be an inswinger,” said Proctor. “So I got tight to the keeper. Then I saw it take a bounce and headed it into the corner.”

When Proctor’s headed effort floated into the back of the Cosmos goal, Miller couldn’t hide his excitement.

“I felt like I pulled both calves and both hamstrings. I gave Jeff Paulus a big embrace. Certainly it was emotional. There’s no way you want a shield presentation or a trophy presentation at the expense of your club.

“We were undefeated against the Cosmos this year. We only drew them back in Edmonton because of a horrendous call against us and, even today, I felt like we were playing against 14 men. There was a point where the referee was taking names like he was making up a phone book and, honestly, I don’t think there was a bad challenge all game long.”

With the draw, the Cosmos leave the door open for the Tampa Bay Rowdies. To catch New York, the Rowdies need to win both of their remaining matches, including at FC Edmonton next week, while the Cosmos would have to do no better than get one point out of its last two matches.

Noselli’s goal came after the Eddies had cleared the initial corner kick. New York pumped the ball back in, and a flick off the head off Stefan Dimitrov fell to Noselli, whose side-footed effort crossed the line even though FCE keeper Lance Parker got a piece of the shot.

For the Cosmos, the goal came off a glimmer of inspiration for a team that looked like it was going through the motions for most of the match. Before the Noselli goal, the Cosmos created a few half-chances, but struggled to find openings in the Eddies’ defence.

But, considering that this was a game between the two best defensive teams in the league, a game that would be low on scoring chances was the probable outcome, wasn’t it?

Edmonton’s best chance to break through — before the Proctor goal, that is — came right on the half-hour mark. Neil Hlavaty floated a free kick into the penalty area. Centre back Albert Watson, who came up to bolster the attack on a set piece, was first to the ball, heading it into a danger area. Teenager Sadi Jalali, who got the start in midfield, looked as if he was going to get to the ball, but was brought down by Marcos Senna.

Jalali didn’t get the call. And you wonder just how much of that came to reputations of the players involved: a Canadian teenager versus Senna, who we all know from his years as a fixture on the Spanish national side?

If that isn’t Senna on Jalali, if it’s another member of the Cosmos, does the Edmonton kid get the call?

Miller had plenty of praise for Jalali and his young players, such as Michael Nonni, Edem Mortotsi and Massimo Mirabelli, who all came in as subs.

“Thinking about the future of the club, we had an 18-year-old centre forward playing against the New York Cosmos, and he did very, very well today. Edem Mortotsi, he’s 20, doesn’t look out of place. We have Massimo, who just had his 22nd birthday and Michael Nonni all coming into the game.”

The Eddies also had a decent strike just a few minutes after the start of the match. Laing, coming off the left side, laid a ball at the top of the box for striker Corey Hertzog, who forced Cosmos keeper Kyle Reynish into a diving stop with a shot from the top of the box.

While New York came in as the heavy favourites playing on home turf, and had some decent spells of possession in the middle of the park, the Cosmos struggled to create many real scoring chances in the first half.

Danny Szetela had the best look for the Cosmos in the first 45, after he was able to slip past Watson and take a pass from Paulo Mendes in the box. But, FCE keeper Lance Parker was quick off the line, taking away the angle, and Szetela sent his shot over the goal.

Senna’s 28th-minute drive from outside the area took a deflection off the foot of FCE midfielder Neil Hlavaty, but Parker was able to read it and palm the ball away from danger.

In the second half, before the Noselli goal, the Eddies had two decent looks. Hertzog blasted a ball into Reynish’s midsection after Daryl Fordyce flicked on a cross from Robert Garrett. And, just after the hour mark, Garrett took a shot from outside the box that Reynish did well to palm over the bar. The Eddies’ midfielder found himself in a lot of space, and decided to have a go.

NOTE: Central defender Mallan Roberts is back to not being able to travel with the team. While the refugee from Sierra Leone is awaiting his Canadian citizenship and has his permanent resident status, he lost his travel documents. And, until he gets new travel documents, a process which isn’t that quick, he can’t take road trips to the U.S.