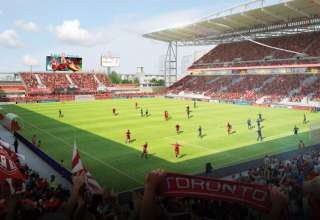 Toronto FC takes in a lot of its revenue in Canadian dollars, but pays out much of its travel and payroll expenses in U.S. dollars. A look behind the scenes shows that the financial game theory in the boardroom is almost as fascinating as the soccer strategies on the field

Nobody has ever bought a sports club with the intention of losing money. While Toronto sports fans can and have complained about the lack of championships won by Maple Leaf Sports and Entertainment’s franchises, it’s inarguable that MLSE has been a major success from a dollars-and-cents perspective.

Over the last few years, of course, those Canadian dollars have become worth far fewer American cents from a currency perspective given how our dollar has sharply dropped in value (and may still fall further in 2016). Furthermore, while sports has been one of the few holdouts within the modern “culture of free” among entertainment consumers, there are signs that this status may be slipping.

Both are massive concerns for a conglomerate like MLSE; the two issues can change quickly, given how advancing technology impacts the fan experience and how the dollar rises or falls on the waves of world economics. All the company can do from a financial perspective, according to MLSE Chief Financial Officer Ian Clarke, is give itself as much time as possible to prepare for both the best and the worst .

“We operate within the U.S. dollar deficiency. I have to buy U.S. dollars,” Clarke said. “We have a hedging policy. We try and lock in the U.S. dollar [at least] a year in advance, so we can plan with some certainty when we come to that 12-month period fiscal year, we say ‘here’s how much the dollar is going to cost us.’ Then we can set the prices of our revenue products and budget our cost accordingly based on knowing we’ve locked in our net exposure.”

Right now, Clarke said, MLSE is “hedged out through June 2017, so we’re fortunate.” Basically, MLSE has already purchased the American dollars it needs to play the 2016 season and start the 2017 campaign. That gives the company some breathing room, though many economists predict the Canadian dollar’s plunge will at best level off in 2016 rather than significantly rebound. If the outlook is still grim in June 2017?

The Canadian dollar was actually more valuable than the U.S. dollar back in 2007, Toronto FC’s first season, so this is the first time in TFC’s existence that the club has conducted its business under the shadow of a struggling national economy. The Canadian dollar’s problems haven’t had much of an impact on the Reds’ soccer operations, general manager Tim Bezbatchenko said. In a strange way, it could even be something of a half-formed recruiting pitch.

In a league where roughly 47 per cent of the players earn $100,000USD or less, that extra salary bump provided by the conversion rate is a sizeable one for your rank-and-file MLS player. The currency gap creates a minor yet interesting loophole within a league that, since it controls all its teams, has a tight hold on salaries and payrolls. This fairly rigid structure somewhat insulates Bezbatchenko’s department from worrying too much about the devalued dollar; those matters are “sort of above my pay grade,” he said.

That’s where Clarke comes in. As an MLSE employee in various capacities since 1990, Clarke has already weathered one economic crisis with the company when the Canadian dollar reached record-low levels  against the U.S. dollar in the early 2000s. This experience isn’t necessarily a help, however, since there’s only so much that even a corporation of MLSE’s size can do against a severe downturn.

“The idea is how do you handle the blows. Knowing that it’s coming hopefully helps taking some of the edge off it and having some certainty gives you enough time to plan,” Clarke said. “But when it’s a real big blow to the gut or a knockout blow, all the planning doesn’t adhere at all. Then it becomes a matter of how you handle that really bad time. But, historically, we’ve been able to weather the storm and then come back out. You hope to have other levers that you can push or pull to counter-balance any immediate hit.”

U.S. dollar payroll expenditures aside, sports franchise ownership is as solid an investment as any in hard financial times. Sport’s value as live, can’t-miss programming is an invaluable asset in the increasingly splintered world of TV viewership, though even sports’ bulletproof status is taking a bit of a hit. There’s an increasing trend for consumers to “cut the cord” on cable or even TV altogether and instead rely on the Internet for their broadcast needs.

Entertainment companies hope that these consumers turn to official websites to find their favourite shows or to stream their favourite soccer clubs’ matches. If one is concerned enough about his or her entertainment spending to cut the cord, however, it’s probably not a leap to assume that this hypothetical consumer is also willing to find an illegal streaming site to watch that match rather than pay to subscribe to Major League Soccer’s “MLS Live” online streaming service.

Dr. Ashwin Patel, a professor and program coordinator of the Sport Management and Recreation And Leisure Services programs at Humber College, believes fan interest in sports could be at an all-time high since technology has given fans countless ways to absorb content about their favourite teams. The catch, however, is that this voracious demand for content can now be met instantaneously online, leaving traditional media seeming almost redundant.

“The best thing about sports is the immediacy,” Patel said. “The challenge now for sports networks is that maybe people aren’t tuning in as much to watch highlight shows because of the immediacy of Vines, GIFs or anything else along those lines.”

If a modern fan isn’t watching a game on an officially-licensed broadcaster, however, that doesn’t mean a club can’t monetize that interest. This tech-savvy fan may have one browser tab opened to a TFC match on an illegal streaming site, but another tab opened to Twitter to converse with fellow supporters. If Sebastian Giovinco scores a wonder goal and the fan wants a second look, TFC’s own social media team is quick to post video highlights and further links to the Reds’ video archive; the more avenues the better to get viewer eyeballs on ads.

In a roundabout way, going to the lengths of watching a game on an illegal streaming website indicates a lot of passion for one’s club, so now it’s up to the teams to figure out how to channel that passion into a way that still generates revenue. The one trump card that a club holds, in Bezbatchenko’s opinion, is the game itself.

“You want to be innovative and accept [technological] change to some degree, because it’s inevitable,” Bezbatchenko said. “I’d rather be ahead of the curve so if that’s the way the game is changing, let’s embrace it. But in my opinion, I don’t think anything will replace seeing the game live. You can’t feel it, you can’t smell the grass, see the flags in front of your face in the south ends, you can’t hear the Red Patch Boys…The game is moving forward and technology is improving….but nothing will replace the in-game experience.”

For many fans, however, the game itself is playing an increasingly smaller role in that “in-game experience.” It’s easier than ever for fans to stay at home to watch matches from the comfort of their own homes, yet there’s seemingly more cache than ever in seeing a game live… or, perhaps more accurately, being seen watching a game live, whether it’s posting a picture of yourself in the stands to your Instagram page or uploading a YouTube video of yourself reacting to an amazing play.

“I go to a sporting event and I want to watch the game, nothing else matters, I want to watch the product on the field. But other than the hardcore fan, that’s not all people want to see,” Patel said. “They’re invested in that but they want the music, the excitement, the socializing aspect, the ability to engage in social media.”

Patel cited BMO Field, Ottawa’s TD Place Stadium and Hamilton’s Tim Hortons Field as heavily-renovated or new venues that have been designed with an eye to “creating an environment where it’s a place to be….the atmosphere itself is of utmost importance.” Of course, BMO Field is undergoing a massive transformation so it can host Canadian Football League matches beginning in 2016; the jury is out on what that will do to the soccer experience.

The ultimate model might be Chicago’s Wrigley Field, Patel noted, as its iconic stature and throwback aesthetic has attracted millions of paying customers (not necessarily baseball fans) over the years despite the fact that the Chicago Cubs have infamously gone without a World Series championship since 1908.

Based on figures from MLS Players’ Union and exchange rates as of late December, here’s what high-profile players make in Canadian dollars