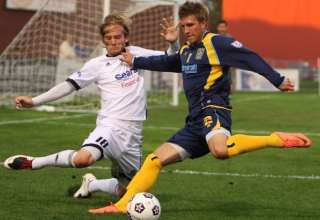 Toronto FC has announced the addition of two trialists who joined the team’s training camp in Florida on Sunday. Midfielder Carlos Martinez and, more notably, left back Justin Davis.

For followers of the NASL, Davis is pretty well a household name. As part of the Minnesota Stars, he established himself as one of the best left backs in the league over the past two seasons. He was a key part of a Stars team that won it all in 2011 and got to the final in 2012.

Davis played both as a defender and striker at the University of New Mexico. In NASL, he’s best known as a guy who can defend first — a trait that’s been a hallmark of a physical Stars team. But, over the last season, he’s become more active going forward, and in 2012 I can recall numerous times in matches against FC Edmonton where Davis made long runs up the left wing. In Edmonton’s final game of last season against the Stars, Davis set up Amani Walker’s tap-in goal and should have had a second assist, but a sitter was botched.

If you can find Davis a decent target in the middle — which he had with the twin towers of Walker and Simone Bracalello last season — he can be a very valuable component. At the NASL level, he’s a physical left back with a really solid ability to gauge when to jump up into the play — along with a solid ability to cross the ball.

Davis, at least in the mind of this keen NASL observer, would be more ready to jump into an MLS lineup than Gale Agbossoumonde, the raw prospect from the Carolina RailHawks who TFC grabbed in the weighted lottery before the opening of training camp.