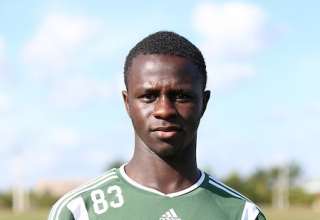 Within the first five minutes of Vancouver’s opening game of the Carolina Challenge Cup against the Charleston Battery, Darren Mattocks and Kekuta Manneh demonstrated their dynamic and dangerous partnership that fans are hoping will lead the Whitecaps to success this season.

By the 30th minute, Manneh had already bagged a pair of goals — one with Mattock’s assistance –— en route to a 3-2 victory over the host Battery Saturday evening at Blackbaud Stadium.

Daigo Kobayashi assisted on Manneh’s first strike before adding a goal of his own in the 50th minute.

“I think the first 60 minutes of the game was very good from our perspective,” said second-year Whitecaps coach Martin Rennie, who partially attributed a less-successful final 30 minutes to tired legs. “Lots of things that we’ve been working on we saw happening. We saw good movement, quick penetration, we scored goals early and we looked dangerous at that point.”

A glimpse of Manneh’s blazing pace came just one minute into the game when he ran past his speedster teammate on a fast break. While Manneh’s ensuing tap-in was disallowed by an offside call, that wasn’t the case three minutes later. The 18-year-old used a quick burst inside the box to beat two Battery defenders before calmly slotting the ball to the far corner past Charleston goalkeeper Kevin Klasila for an early 1-0 lead.

Manneh’s 18-yard effort in the 22nd minute was tipped over the bar, but he found the net again in the 27th, one-timing an exquisite lead pass from Mattocks over an onrushing Klasila.

A member of The Gambia U-20 men’s national team, Manneh spent last season with the Austin Aztex of the USL’s Premier Development League, where he notched 12 goals and nine assists in just 13 games. He signed a Generation Adidas contract in January and was selected as the fourth overall pick in the 2013 MLS SuperDraft shortly thereafter.

“I think that he’s got incredible potential,” Rennie said. “He’s a very hard-working, humble kid who is willing to learn and willing to listen. But not only is he listening, but he’s understanding what we want and he’s getting better at it. He’s got natural talent that we can’t coach, and that’s what’s exciting.”

The humble personality that Rennie spoke of was evident in Manneh’s post-game interview, when he attributed his pair of goals to luck. Whatever it was, his Vancouver teammates are excited to have him.

“You can see what he brings to the table for us attacking wise, and he does the defensive work as well which is even a plus,” said Vancouver goalkeeper Brad Knighton, who was rarely tested in the first half. “The way he linked up with Darren (Mattocks) and Kenny (Miller) in the first half was something special.”

Charleston increased its pressure in the second half after a wide-open Kobayashi volleyed Young-Pyo Lee’s cross into the right corner of the net from six yards out for a 3-0 Whitecaps lead.

The Battery made things interesting with goals in the 71st and 79th minutes, both of which were well-taken. Nicki Paterson redirected Gibson Bardsley’s cut-back pass inside the near post, and Dane Kelly gave Knighton no chance with a powerful, curling shot, closing the gap to 3-2.

The contest marked the first of five matches within a nine-day span as Rennie makes final preparations for Vancouver’s season opener on March 2 vs. Toronto FC. In addition to remaining Carolina Challenge Cup matches against Houston (Feb. 20) and Chicago (Feb. 23), the Whitecaps will scrimmage the College of Charleston Sunday and cap the trip Feb. 24 with a four-hour trek north to face the NASL’s Carolina RailHawks, the former employer of Rennie and several members of his squad.

With a focus on improving his team’s fitness base, Rennie employed a strong starting lineup that included a mixture of veterans and newcomers and made only four substitutions. Trialists Dever Orgill, Evan James and Ethen Sampson saw action in the second half along with forward Tom Heinemann. Captain Jay DeMerit did not dress.

Rennie plans to use another strong lineup Sunday against the Cougars, after which he will consider his approach for Wednesday’s contest.

“We’re just looking at a couple of different combinations,” Rennie said. “Now is a good time for us to work on that and to see how different players fit with one another. We like having a lot of games on this point. We like to try and get guys as close to 90 minutes’ fitness – now – as possible.”