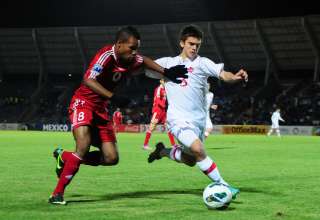 In the first half, the Canadian U-20s didn’t take their chances. In the second half, they were simply taken to the cleaners.

Looking fatigued at the high altitude, and utterly disorganized for large portions of the second half, the Canadians were full value for a stunning 2-1 loss to Cuba in their opener at the CONCACAF U-20 Championship, Monday.

Canada needs to finish top-two in the three-team group — which also includes Nicaragua — in order to get to the quarters. The four semifinalists earn berths to the U-20 World Cup in Turkey.

A back line with little cohesion basically gifted two second-half goals to Cuban striker Maykel Reyes. His first came after he blew past Canadian left back Marco Lapenna, then danced around a desperate tackle from centre back Doneil Henry before slotting home. As someone who has logged MLS minutes with Toronto FC, Henry has got to know to stay on his feet in that situation. Meanwhile, the goal was just one example of how Lapenna was simply run ragged by Reyes and fellow Cuban attacker Jordan Santa Cruz.

Right before the goal, Reyes was robbed by Canadian keeper Maxime Crepeau, after Santa Cruz had all day to cross the ball from Lapenna’s position and no one bothered to mark Reyes in the middle of the box.

But Reyes soon grabbed his second, as he headed home from a scramble after Henry was left in no-man’s land and the Cuban forward was able to get ball side and goal side of Candian midfielder Samuel Piette, who had tried to come back to help.

Piette also struggled. In the second half, the Cubans found plenty of space between midfield and the Canadian centre backs and were able to build up steam for attacks. Piette and the CBs simply weren’t compact enough.

Canada did get an 89th-minute consolation; off a corner, a Henry header was parried into the path of Stefan Vukovic, who nodded the ball home.

But what was it.

The game began oh so slowly, really at a walking pace. And that was to be expected, as teams have to learn how to conserve energy in Puebla, Mexico, which is at an altitude of roughly 7,100 feet, or about 1,900 feet higher than the Mile High City of Denver — for comparison’s sake. In the thin air, neither team looked too rushed to get set-pieces underway or to push too many men forward.

And, then, almost out of nowhere, Canada had a chance to take the lead. Striker Keven Aleman was able to send Cuban defender Abel Martinez crashing to the ground after a wonderful shoulder fake, and was in alone on goal. But he got too close to the keeper, and his left-footed shot was easily blocked.

The Cubans played a slow, conservative game, what you’d expect from an underdog island sea-level nation to do at an extreme altitude. But there was one exception of note. Right back Yosel Piedra was simply dominant in the first half. And, while Canada created the better chances and had the prettier dribbling skills, no player worked harder than Piedra. At one end, he cleared a goal-bound header from Michael Petrasso off his goal line. Then, we saw him flying up the right wing. Later, he was upfield like and out-and-out target man. We also saw him moving into central midfield to help cut off the supply to the Canadian forwards.

As Cuban players go, Piedra was well above the level we normally see. At least in the first half.

In the second half, all bets were off. The altitude looked to have had more impact on the Canadians than it did on the Cubans, who train on a limited budget and have most of their players at or near sea level for most of the year.