July 06, 2022
9 New Articles
Home NASL & USL More NASL & USL It could happen: A three-way tie at the top at the end of the NASL spring season 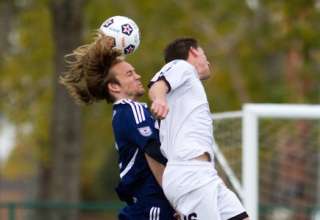 For the Carolina RailHawks, it wasn’t the result they wanted. For the NASL as a whole, the penultimate weekend of the spring season is going about as perfectly as it had hoped.

The RailHawks, including Canadian defender Paul Hamilton, knew that they’d clinch the NASL spring-season title with a week to spare if they beat Atlanta on Saturday. Instead, the RailHawks needed a last-gasp goal from Austin Da Luz to squeak out a 1-1 draw.

The RailHawks remain atop the table with the result. But, as of Saturday night, four of the league’s seven teams — Carolina, Atlanta, San Antonio and Minnesota — remain alive in the standings.

San Antonio thrashed Fort Lauderdale 4-1, allowing it to make up a good chunk of goal difference on Carolina. The Scorpions host the RailHawks next weekend.

And, this scenario is plausible. Let’s say Minnesota wins out — that is, it beats FC Edmonton at Clarke Stadium Sunday and then Atlanta next weekend. Then, Canadian Kevin Harmse and the Scorpions beat the RailHawks. The result? MUFC, Carolina and San Antonio would all wrap up the spring season with 20 points each — a three-way tie at the top of the table. It would come down to goal difference, where Carolina currently has a six-goal advantage on Minnesota, and a four-goal bump on San Antonio. So, Minnesota can’t just hope for a one-goal win against FCE this Sunday; it needs to press early and often. And it’ll be tough as hot weather is expected for Edmonton, and when the sun beats down on the Clarke Stadium turf, the players will tell you if feels 10 C warmer on the field than what the weatherman says the temperature is outside.

And San Antonio, to get the title, would need to win its game by a bunch.

But, on a night when MLS gave us a three-goal rally by the San Jose Earthquakes, a wild 4-3 game in Montreal capped by a late Colorado goal, and a late New England rally to get a point from its match with Chivas, NASL actually upped the ante. NASL is giving us a wild weekend that creates a Total Perspective Vortex worth of combinations that could decide the spring title and with it the chance to host the Soccer Bowl.

In terms of sheer excitement, this might have been one of the best Saturdays ever for North American soccer. And, for NASL, it’s not over yet. Minnesota needs to beat Edmonton Sunday, and to do it by a healthy margin. Buckle your seat belts.