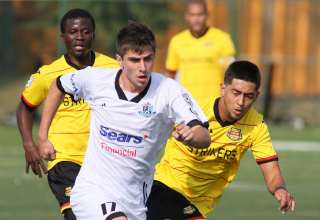 FCE's Elvir Gigolaj, in white, in action against the Strikers. PHOTO: FC EDMONTON

As soon as FC Edmonton’s spring season came to a close, defender Adrian LeRoy and striker Elvir Gigolaj were released by the club.

Coach Colin Miller made the announcements immediately after the Eddies defeated Minnesota United FC 3-1 on the final day of the spring season.

“It’s never a good day when you have to do this,” said Miller.

For LeRoy, it makes the second time he’s been chopped by the club. He was released after the 2011 season, but earned a roster a spot out of camp in 2013. Miller said LeRoy knew that he’d made the club because of the knee injury to Albert Watson that kept the FCE captain out of the lineup at the start of the season. And Miller said LeRoy knew that when Watson was healthy, he could be the victime of the numbers game.

“He’s been a model professional and I will do my utmost to recommend him to a new club,” said Miller.

Gigolaj, who was signed out of St. Mary’s University in 2012, scored on the final day of last season. But he hasn’t played at all this year.

Miller needs the space and money so he can bring in a couple of attacking players. He said one of those players is expected to join the club Aug. 1; he is talking to another club about a player who would come in on loan. He said he will know in two weeks if that player will be coming to Edmonton.

And, he expects that Carlyle Mitchell, the defender who was recalled by the Vancouver Whitecaps three weeks ago, will be back in Edmonton in August. “That will be like a new signing,” he said.

As well, Ajeej Sarkaria, who was moved from the Reserves to the senior club before the season, has been moved back to the Reserves, which frees up another roster spot.