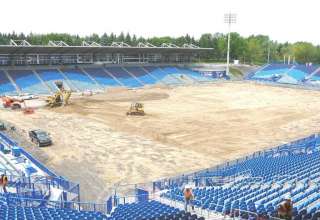 Stade Saputo, as of June 1. ALL PHOTOS: MIKE WYMAN

While bulldozers pushed sand around what will once again become the playing surface at Saputo Stadium, a couple of dozen journalists, orange vested and hard-hatted, were given a tour of the facility Friday. The press qaa shown a two-minute film synopsis of the work performed over the past seven months, then club President Joey Saputo took to the microphone.

“The stadium will go from 13,000 to over 20,000 seats. It will be bigger but more intimate and the atmosphere will be extraordinary. I’m pleased with the final result. In my opinion Saputo Stadium will be one of the nicest in MLS.” Saputo continued.

The grass for the pitch is ready and waiting, according to Saputo — and there are still some seats to be installed in the east stands that will be put in place after the official opening. But the renovated Saputo Stadium is going to be a great place to watch a match, he enthused.

“There’s not a bad seat in the house, the sight lines are fantastic. You’re still very close to the field. The way the stands are you’re basically on top of the field. It was a great experience before the expansion and it’s going to be even better.”

With club vice-president Richard Legendre as guide the tour got underway, making three stops before returning to the room in which they assembled.

The superstructure is in place and virtually all the seating have been installed, with every one of the original seats having been retained. Seats have been added on top of the south grandstand and topped with private loges.

“The loges are pretty much all sold out,” Legendre said. “There was one that was going to be used for promotion but it is now available.”

Expanded seating in the east end means that the supporters section benches will be replaced with seats and the Ultras will now be banging the drums all day behind the west goal.

That section will be benches, because it is the supporters section. They prefer benches, they never sit down anyway.”

Queried as to what the projected capacity would be for the Impact’s first game at their refurbished home, Legendre ventured that the team would be awfully close to their projected figure.

Asked if the team had any plans for further expansion, he said that it was going to go with its original plan for the foreseeable future. 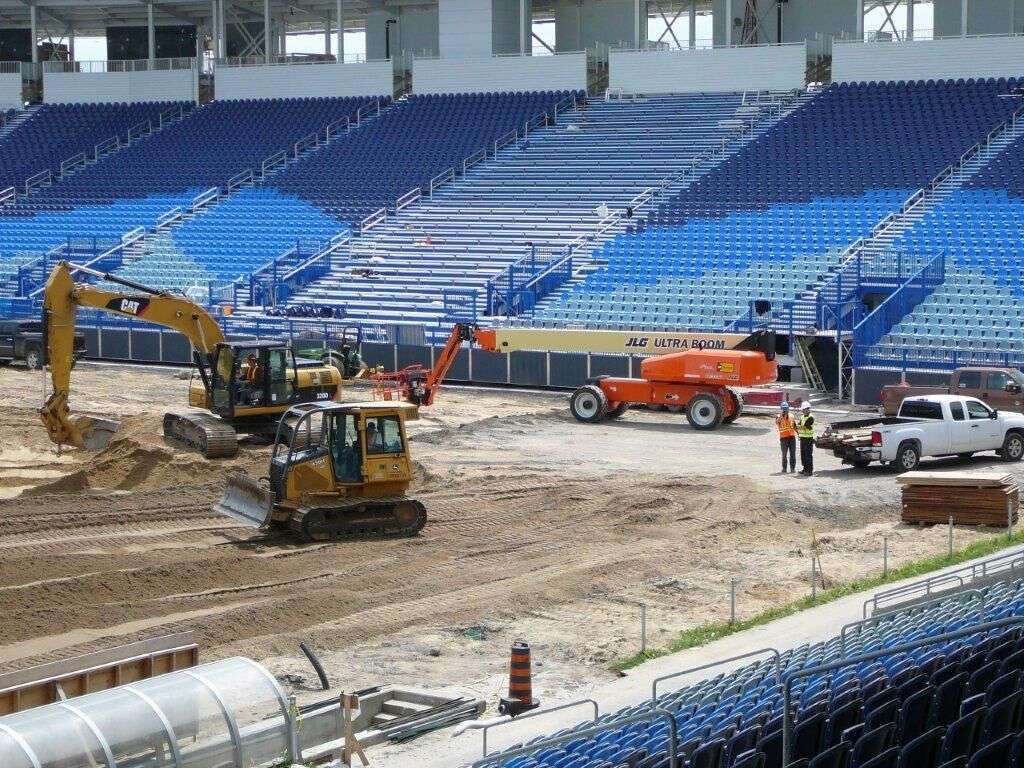 “Right now we haven’t made any plans along those lines. We planned for many months before deciding to go with 20,000. Scarcity is so crucial in terms of marketing and for the capacity of a stadium. We think that 20,000 is very close to ideal. The Montreal Canadiens have 21,000. There are always ways to increase but right now it is not in the plans.”

Also not featuring in Impact plans is the addition of legendary Juventus forward, Alessandro Del Piero, to the roster. Joey Saputo addressed the rumours that had the veteran striker spending time with Saputo family members in Florida prior to flying northward.

“I can tell you that none of my family is in Florida but he did meet up with Bernardo Corradi. I can tell you that yes, he was in Miami. Bernardo Corradi was there with him. They played tennis a couple of days ago and I know Corradi was talking to him about Montreal and how great it is,” he said. “The last time we spoke to Del Piero’s people was in August last year when his brother called me and said that, ‘Yes, he does want to play in MLS but decided it was going to be in Los Angeles or New York.’ At that point discussions ended. I know that his brother tried to contact us after our home opener to congratulate us on the attendance for the game.” Saputo continued.

“But I can honestly say that there have been no other negotiations with the Del Piero clan. As I’ve always said, to have a DP of that calibre here in Montreal it has to be someone who wants to be here for more than simply extending his career — like we saw with Marco Di Vaio. He wants to be here for reasons other than just to collect a paycheque.”