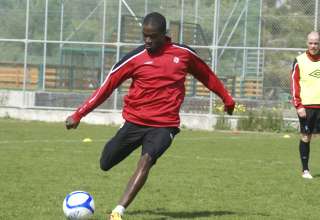 For the next couple of weeks, Edmonton native Tosaint Ricketts will worry about trying to score goals for Canada.

But, once he pulls off the Canada shirt after June 12‘s World Cup qualifier at home to Honduras, Ricketts has to get down to business. He will weigh several offers he has on the table for his services — all of them from Europe.

Ricketts said from the Canadian national team’s training camp in Toronto that he’s looking at several offers. Ricketts was clear that the options that he has on the table all come from European clubs, and that none of them are trials — they are contract offers.

At this stage in his career, he wouldn’t consider coming back to North America full-time to try his luck in MLS.

“I could always get something in North America,” he said. “But I am only looking to Europe right now.”

Ricketts will be part of the Canadian squad that faces the United States Sunday at BMO Field. Canada then plays Cuba on July 8 and Honduras on the 12th.

In 2010-11, Ricketts was part of a FC Politehnica Timisoara team that finished second in the Romanian league — a fantastic moment in the history of the Transylvanian club. But, in May of 2011, the Romanian league refused to grant Timisoara its first-division licence because of financial issues. The club lost its Champions League-qualifying spot and was relegated.

“When I came to the team, it was undefeated. They had just got knocked out of Europe by Man City. And then we had a great season, we finished second in the league and go a qualifying spot in the Champions League. After that, everything fell apart financially for the club.”

As Timisoara toiled in the lower league, Ricketts wasn’t getting paid. But, he stuck with the club and played until late April. Ricketts said that once Timosaora started getting behind in payments, a few teams stepped up with offers to buy him. But, he said the club didn’t want to sell, thinking that it was somehow going to find a way to get control of the finances.

After the Romanian season ended, Ricketts got the chance to spend a couple of weeks at home in Edmonton with his family, and it gave him time to think about what he has on his plate. He also got the chance to catch FC Edmonton live at Clarke Stadium; he considers FCE keeper David Monsalve a close friend and Ricketts is a product of Edmonton’s famed Juventus club, which also produced FCE teammates Antonio Rago, Matt Lam and Shaun Saiko. While Ricketts was a couple of years ahead of those three in the youth program, he said it was nice to see them playing for the Eddies.

And, as for Canada, Ricketts believes the team built some real chemistry through the first round of World Cup qualifying, and has the experience to not only cope with the gamesmanship it will see when it goes on the road, but to take advantage of the games in Toronto.

“I feel like that if you have any experience playing in Europe, you understand that home advantage is so big, the fans really support you, get behind you. We know that, and our players are aware of the big obstacles. But we are confident that we can fight for 90 minutes and get a result.”