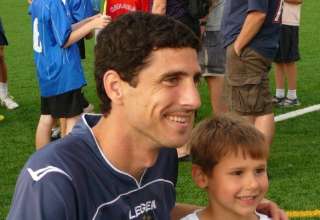 For several hundred youth soccer players in Pierrefonds, Wednesday night marked the long-anticipated return of the Montreal Impact, who have made the local suburb an annual stop on its public practice tour schedule.

The healthy members of the squad, augmented for the occasion by a handful of players from their U21 club, with mascot TAK-TIK in tow, spent almost 90 minutes on the pitch, the time about evenly divided between entertaining the crowd and signing autographs after the conclusion of the low-energy workout.

While the Impact players jogged around the artificial surface and loosened up, TAK-TIK took centre stage and began lobbing the first of dozens of T-shirts into the crowd, solidifying his claim to being the most popular of the guests in attendance as the junior members of the crowd rose as one, waving and hollering for the swag to be tossed in their direction.

A short nine-on-nine scrimmage on a half-length field, with both nets manned by U21 representatives, was the first item on the program. It lasted about 15 minutes and turned some of the youngsters into referees with shouts of “offside” following many of the goals. The loudest cheer of the night was the one that greeted an errant shot that sailed over the fence surrounding the pitch, landing on the adjacent ball hockey surface. While no final score was announced, the game’s offensive standout was Evan Bush.

Normally found in front of his own team’s goal, Bush potted a pair and headed another just wide. He also scored in the free-kick competition that closed the evening’s playing activities, prompting the announcer to declare he’d be starting at forward in the Impact’s next game.

Asked about his scoring prowess afterwards he said that he’d enjoyed seeing how the other half lives. “We were just messing around a bit. I don’t get to get in those spots very often so I get excited when I get to do stuff like that.”

Between the scrimmage and the free kick competition a series of relay races keying on soccer skills were run. Four heats, teaming Pierrefonds youth players with members of the Impact, involved dribbling around cones, shooting into a net and then shooting another ball, this one received in the air from either Eduardo Sebrango or Reda Agourram, into a second net before racing back and tagging up with their partner who then repeated the drill. The winners of the event’s final proved to be Mignane Diouf and his partner, a youngster named David.

Kids and parents alike flooded onto the field for autographs at the conclusion of the practice with nobody going away empty-handed and no Impact players being ignored.

“I think everybody here enjoyed themselves. It turned out to be a decent night after the way the day started. You couldn’t ask for more, that’s for sure,” he said. “This is the sixth year we’ve done this, the second time at this park. We’ll continue to do it as long as the kids turn out.”

Assistant coach Mauro Biello agreed, saying “I think it’s great. It’s important to be close to the community and to our fans. Every time we get an opportunity like this the fans get a close look and they get to met some of their favourite pros. We do about six or seven of these a season.”

Veteran Sebrango was of the same opinion.

“It’s not my first time here. We were here last year. It’s great to do this for the community and to help the kids around here. It’s a good cause and I think it’s good for us too, it also helps promote the club.”

The forward, who ended his brief retirement only a week ago, figures he’s pretty close to top condition already. Asked if he felt he was ready to go a full 90 minutes he replied in the affirmative.

“I think so. We have a week between games now. We’ve been working real hard the last couple days and I feel good. I think I should be OK for next Wednesday to play whatever they give me to play.”

Agourram was among the last to head for the team bus. The Montreal native said, “It’s always nice to come here and do a public practice with all the kids. We’re just enjoying the day and having fun with them.”

It turns out that Agourram has been on the other end of this type of evening.

“When I was younger I used to go to the Impact’s public practices,” he recalled. “I enjoyed it
and I liked to meet the players and talk to them, just ask them for some advice.”

Who knows? A decade from now a kid in attendance this evening might just be standing in an Impact uniform on the field at Parc Grier, signing for all comers and inspiring yet another generation of soccer players.