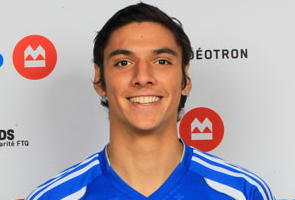 After three weeks of indoor workouts in Montreal the Impact are taking it outside and on the road. With the exception of Anthony Jackson-Hamel, Maxime Crepeau and Zakaria Messoudi, who will be joining the Canadian U-20 side to train in Mexico ahead of the CONCACAF Championship, the club leaves for Orlando tomorrow to take part in the Walt Disney World Pro Soccer Classic as well as finding time to fit in a non-tourney match against the Philadelphia Union while in warmer climes.

Defender Zarek Valentin, who will sport the No. 3 this season, is looking forward to the change of scenery and shift of focus.

“I think we’re a little bit tired of playing each other already. We’re ready to go out and play some games and kick someone else for once,” he said before commenting on the results of the past three weeks. “I think you can see progression with the coaching style and everyone’s getting used to that.

“I think we’re all just eager to get out to play on grass,” said goalkeeper Troy Perkins. “Playing against an opposition is always a lot more fun than playing against yourselves. It’s going to be good and I think a lot of the guys are excited.”

“Football is an outdoor sport,” declared head coach Marco Schallibaum. “And it’s a lot more pleasant at 25 degrees outdoors than it is indoors. We’ll be on grass and the sun will be shining. It’s good for morale too.”

Queried as to why the team was also taking a number of youngsters who may not figure in their immediate future plans, Schallibaum said. “They’re youngsters who have dreamed of spending three weeks with us. It’s sort of a gift we’re giving them but it’s one that they deserve. They’ve all worked very hard and deserve to be with us.”

“Usually we into the games a little earlier but this year we’ve concentrated on preparation and being in shape. It’ll be good to play in a tournament. It’ll give us our competitive edge before the season starts,” said midfielder Patrice Bernier.

“Most of the players who started last year came back. The new players have adapted well to the group as well. It’s good to see we have a good dynamic right from the start and we can build upon what we did last year,” the Brossard, Que. native continued.

“We’re playing Kansas City. They’re a good team but they’ve made a lot of changes,” he said when asked about the opening game. “Last year we played Vancouver and they taught us a good lesson, especially in the second half and five games later they weren’t the same team. The important thing is to take the games as part of the learning process and learn quickly to avoid making errors in the early going like we did last year when we left a number of points on the board early that ended up being very costly in the end.”

“Obviously the fact that we have a year under our belt helps,’ said Valentin when discussing his second camp with the Impact.

“Guys compete a little more, maybe because they know each other better. You can clip somebody a little bit and at the end of the day it won’t result in a hissy fit or anything like that. Guys are closer and the chemistry is there, you can see it.”

He also offered some thoughts about the first game in Orlando.

“Obviously it’s not a real game and it doesn’t count for anything but, if I’m not mistaken, I think Vancouver won the tournament last year and they had a very good start to the year so I think we should take that into account and try to get the season started on a good foot.”

While he did say that his initial ideas about player personnel are essentially unchanged, Schallibaum is not ready to announce his starting XI.

“I’ll probably change five or six players at the half or after 60 minutes,” he said. “We have three games in six days. I’d like to have two squads, each going 90 minutes, to ensure that everyone gets some minutes in their legs so we have to do a bit of juggling. There are certain positions where we have a lot of competition.”

There’s more to the trip to Florida than simply playing a half-dozen friendly matches and losing winter’s pallor according to the coach.

“I’ll be having face-to-face meetings with each of the players while we’re away so I can let them know what I expect of them and we’ll also be doing some open-air team-building activities,” he said.

“We had the little Amazing Race type thing which is always good for team bonding,” said Valentin. “But it’s also good to meet with the coach and see what his expectations are and what he expects from you because if he’s open and honest then you know exactly what he wants and it’s not sugar-coated or lost in greys. It’s cut-and-dried whether he wants you to score goals, whether he wants you to keep them out, whatever it might be.”

“I can’t say anything at the moment,” said Schallibaum when asked about the possibility of other players joining the team when it was in Orlando. “We’re going with those who are here at the moment. There may be some news in the next couple days,” he said with a smile.