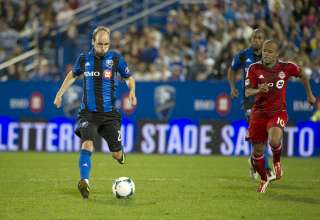 When the Montreal Impact selected Justin Mapp from the Philadelphia Union in the expansion draft, there weren’t a lot of tears shed by fans in the City of Brotherly Love. The Mississippi-born midfielder had spent the previous season and a half in Philly, showing occasional signs of the skills that prompted D.C. United to draft him before he had finished high school.
But he rarely rose to the level of play he had shown with Chicago in 2006, when he earned mention on the MLS Best XI.

The then-27-year-old with a decade of MLS experience behind him did not increase his fan base during the Impact’s inaugural 2012 campaign. Mapp played under 1700 minutes in 2012, spreading them over 27 appearances. He started 21 matches but only played a full 90 minutes three times, all early in the schedule. While his scoring numbers, a pair of goals and five assists were not in and of themselves sub-par, fans and media found more than a few things that rubbed them the wrong way about the veteran’s play.

Beset by a series of niggling injuries and obliged to leave the team briefly for family reasons, Mapp spent most of the season trying to get in gear, to less-than-ideal results. As the season unrolled, his questioners became doubters and doubters became critics.

Observers wondered about his fitness level, citing a perceived lack of endurance. All too frequently, Mapp dribbled into heavy traffic but lost the ball, leading to questions about his game sense. Critics expressed dismay at his crosses, too often directed, it seemed, to infinity and beyond.

Most damning of all in the eyes of the pundits, particularly those who supported the clubs increasing European tendencies, was his apparent inability to successfully mesh with incoming Italian superstar, Marco Di Vaio.

Given all this, Mapp’s named featured prominently on many lists of players not expected to return, his spot solidified when the Impact parted company with head coach Jesse Marsch, all but apologizing for having gone against the club’s instincts and philosophy by hiring an American coach. Most of the American players on the roster were seen as his choices rather than organization picks.

But return he did. After being left unprotected when his contract expired, Mapp was re-signed at a discount but not without an endorsement from the club.

“Justin is probably one of the most talented players on our team and we’re very happy to have him back. I want to emphasize that,” declared Impact Director of Soccer Operations, Matt Jordan, in late January.

Words of support notwithstanding, Montreal also invited a number of new faces to try out for a spot in the midfield. They drafted speedy collegian, Blake Smith, with their first pick in the SuperDraft, worked out a deal to bring 31-year-old Andrea Pisanu to town from Bologna and promoted local product Wandrille Lefevre to the first team.

Used sporadically in the early going, Mapp had his first 90-minute outing on March 30 in a 2-0 loss to Sporting Kansas City and hit his stride in the month of May, putting up performances that caused most fans to, if not forget last season, give him a pass on it. Mapp raised his level of play to somewhere well beyond expectations.

The Impact played seven games in the month, four in regular MLS competition and three more in the Amway Canadian Championship, going 3-1-3 overall with Mapp, if not leading the way, certainly at the front of the pack.

The month opened with the second game of the Canadian Championship semifinal in Toronto. The score sheet shows that he potted his first goal of the season in the 24th minute and, after beating a Reds defender in the 37th, got the ball to Di Vaio, who put it into the mesh. The video highlights show that Mapp was instrumental in two other goals during the 6-0 rout that put Montreal through to the finals. His 34th-minute shot, rebounded to Daniele Paponi, who promptly scored his first goal. In extra time, another Mapp shot became a rebound, this one driven home by Di Vaio.

Three days later Mapp got both goals in a 2-2 draw against Columbus and on May 8 his through ball resulted in Di Vaio’s fifth of the young season, the Impact’s only goal in a 2-1 loss to New York Red Bulls.

The Mapp Express continued to roll down the track with the engineer providing a low cross to the six-metre box that Felipe put away as the Impact prevailed over Real Salt Lake, twice coming from behind to tie the game before taking it by a 3-2 score in extra time at Saputo Stadium on the May 11.

After a brief interruption for the first game of the Canadian Championship on the 19th, a scoreless draw against the Vancouver Whitecaps at Saputo Stadium, things got rolling once again against Philadelphia on the 25th. Marco Di Vaio led the scoring parade, his hat trick spearheading a 5-3 win. Mapp assisted on the first two, starting the scoring play on the opener with a pass up the touch line and lobbing the ball over the Union defence to Di Vaio for the second.

Montreal clinched the Voyageurs Cup on May 29, playing to a 2-2 draw in Vancouver and, with the aggregate also deadlocked at two goals a side, claiming the title on away goals. Mapp’s 84th-minute corner kick, headed in by defender Hassoun Camara, brought the Impact level and proved to be the winner.

The George Gross Memorial trophy is awarded to the Most Valuable Player in the Canadian Championship. In 2013 it went to Justin Mapp, whose exposure to things Canadian was minimal at best while growing up.

“We didn’t get too much history on Canada growing up in Mississippi but I’ve enjoyed my time here so far and I’m trying to learn as much about it as I can,” he said after practice last week. “It was pretty cool playing in the Canadian Championship and seeing how passionate all the fans are. Our fans especially, and in Toronto and Vancouver as well. They’re very passionate about the Cup.”

All told, Mapp accumulated three goals and five assists in May, eclipsing the numbers it took almost four times as many games to put together in 2012. He’s proved that he can go 90, doing it four times since late March, which also betters last year’s mark. And probably most important on a team with a decidedly European orientation, he’s shown that he can co-exist with and complement Marco Di Vaio. This season Mapp’s passes arrive at the proper spot at the right moment and serve as one of the main reasons the Italian striker stands second among MLS marksmen.

His recent performances have garnished him mentions in the U.S. press as a possible national team member, a status Mapp has not enjoyed since 2007. It has also caused fans to shout his name in delight rather than despair and stimulated at least one journo to post an open letter of apology (CLICK HERE) and offer to help set up a fan club he’s dubbed The Mappquesters.

Asked what he credits for the turnaround in his play Mapp replied, “For whatever reason I had a lot of injuries, kind of on and off last year and that never helps. It seemed that every time I got back playing, I would have a little nagging injury and be out a few weeks so I sort of felt it throughout the year. So far I’ve been able to stay healthy and I think that’s helped me personally a lot.”

A list of other possible contributing factors — om a new coach and change in team philosophy to improved training regimens and greater familiarity with teammates — are offered up as possibilities but the soft-spoken midfielder remains firm as to the main reason for the success he’s had to date in 2013..

“No, nothing necessarily. But I’m sure every little bit helps. You’re more familiar with the guys. They believe in me personally and the coach shows confidence in me and wants me to go out there, play my game and be dangerous. It’s all the little things but I’ve been able to stay healthy. That’s the main thing for me,” he said.

“I don’t think I’m really doing anything different. I’ve been playing for a while and haven’t come up with any new philosophies or training techniques necessarily,” he continued. “It’s just that I’ve been healthy and the team is doing well so that’s just spilled over onto a lot of different players.”

One of very few Impact players who do not engage with fans on social networks, Mapp’s hair and his right foot both have Twitter accounts but he has yet to send his first tweet as a complete entity.

“I dunno. I haven’t joined that world yet but I’m sure that one day I’ll take the plunge,” he said, possibly more out of resignation than enthusiasm.

Since Mapp doesn’t tweet about basketball games, travel plans, Oreo cookies, pets, world peace and restaurants or even post embarrassing photos of teammates sleeping on airplanes, how does he spend his off hours?

“Physically the game takes a lot out of you and we have got a pretty busy schedule, so just taking it easy,” he replied.
“Now that the weather’s nice I try to get out and see a lot of the city and take advantage of Montreal because it’s a very unique and cultured city. I hang out with some of my teammates, play golf and go see a movie here and there. Nothing too crazy, I guess.”

It sounds like the MVP from our national championship is adapting well to life north of the 49th parallel. Away from the pitch, aside from a slight accent that betrays his origins, it sounds like it might be tough to tell him apart from somebody who was born here.