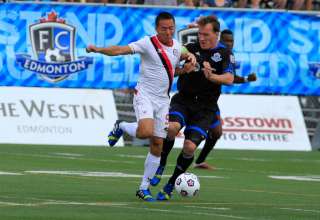 Even though the two cities are on opposite corners of the North American content, the bad blood between the sides were on display as they played to a 1-1 draw Sunday at Clarke Stadium.

FCE’s Chris Nurse equalized off a free kick after a controversial opening goal from Atlanta’s Horace James. Replays showed that the ball struck James’s upper arm, near the shoulder, before he tucked the ball past Eddies’ keeper Lance Parker just after the start of the second half.

But the goals may have been overshadowed by the pushing and shoving that took place after dead ball situations, and the amount of in-your-face trash talking that went on between the sides. At halftime, it got to a boiling points as the two teams squared off just outside the Clarke Stadium dressing rooms. Atlanta coach Brian Haynes and FCE coach Colin Miller broke up the fight.

Miller joked that it was “handbags, lipstick and eyeshadow,” but it was clear the emotions weren’t being kept in check on the field. Maybe the biggest surprise is that no one was sent off, though Eddie Corey Hertzog was stretchered off late in game after being scythed to the turf by Milton Blanco, who saw yellow. Hertzog has a knock on his hip.

Nurse said the bad blood stems from the incident the last time these two teams played, when FCE captain Albert lost two teeth on a late challenge from Danny Barrera, where the Atlanta midfielder drove his shoulder through the defender’s head after the ball was gone.

“He never apologized for it,” said Nurse. “And that certainly brought out a lot of aggression from us.”

Nurse said “Barrera is not a bad guy,” but that it was unacceptable that, two months after that game in Atlanta, that the Silverback hasn’t owned up to what he did.

The NASL also has to take some heat, here. Had the league looked at the challenge on video and issued a suspension, as other leagues do for red-card-worthy fouls that go undetected in the games themselves, the tension might have been diffused. But, with the feeling that Barrera had got away with it, the Eddies weren’t a happy bunch. To use a hockey comparison (and, as a Canadian site, we’re gonna use hockey comparison), Barrera would have been obliged to fight soon after the start of the game.

“It was two heavy hitters having a go at each other,” said Miller after the match.

Atlanta had the better of the chances early in the match, as the Silverbacks were able to spray the ball around, using good, quick passes on the ground to push and pull the Eddies’ 4-4-2 formation. Off a corner kick, Parker was forced to stretch to push an effort from Richie Menjivar over the bar.

But, despite Atlanta having more of the ball, Edmonton has two great chances to score: Shaun Saiko sent a low drive that forced Nasco into an awkward, diving stop. And, off a free kick from Neil Hlavaty, the ball deflected off Atlanta’s Bobby Reiss and towards the Atlanta goal. Barrera headed the ball off the line, off the underside of the bar and it was scrambled out.

After the scrap in the dressing room area was sorted out, Atlanta got the opening goal. Right after the start of the half, Barrera hit a through ball that hit James in the chest. He was behind Watson and Mallan Roberts in the centre of the Edmonton defence. James chested it down and then stroked the ball past Parker. But was it his chest? Replays indicated that he stretched out his right arm and the ball hit him near or just underneath the shoulder, on the upper arm. But no Edmonton player protested.

Edmonton, though was able to get on level terms thanks to a set piece, where the team was the most dangerous all afternoon long. Hlavaty delivered a speedy cross that Nasco couldn’t come out to grab; Nurse nodded it into the corner of the goal.

Just a couple of minutes after Nurse brought the Eddies level, the home team came oh so close to take the lead. Hertzog’s low shot was saved by Nasco, but he pushed the ball right into the path of Eddies’ striker Michael Cox, who had just come an as a sub. Cox has an open net for a tap-in. But Atlanta fullback Mike Randolph made a lunging challenge to knock the ball away. And, for that, Randolph deserves full credit for saving his team a point on the road.

Still, Atlanta, the spring NASL champs, have yet to beat Edmonton this season in three tries. It’s one of those strange situations, where a team just matches up really well against another. It’s just that, in this case, there’s the added spice of the bad blood between the teams.