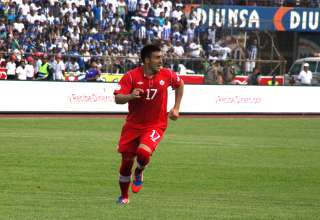 The absences of Atiba Hutchinson and Dwayne De Rosario are the highlights — or lowlights — of the 22-man Gold Cup roster announced by the Canadian Soccer Association on Tuesday.

What do Hutchinson and Hainault have in common? Both are unattached at the moment. Hainault spent half of last season with Scottish Premier League side Ross County after leaving the MLS, and Hutchinson is searching for new opportunities after yet another standout season at PSV Eindhoven.

Canadian coach Colin Miller said that, had both players been employed, they’d be in the pre-Gold Cup that begins June 26. He said both players were “gutted” at having to turn down the invites.

“Atiba is a big loss to the team,” Miller said. “He’s in a tough situation… But it’s not an easy time for the European-based players, not if you’re out of contract at this time.”

He said that Hutchinson is “in the midst” of a move “that would financially help him for the rest his career.”

With the risk of injury, playing in the Gold Cup is risky for those who have a lot to lose. And there isn’t proof that Gold Cup success turns the heads of those involved at European clubs. Still, the roster has four other unattached players who said yes to the call — defender Adam Straith, midfielder Julian de Guzman (who said in May he’s looking at options in the 2. Bundesliga — CLICK HERE) and forwards Randy Edwini-Bonsu and Simeon Jackson.

As for De Rosario’s absence, that was a coach’s decision. Canada’s all-time leading scorer was left off the roster so some of the younger strikers could get more playing time.

Miller said he spoke at length with DeRo.

“I told him we would be going with a younger group… it’s just a case of numbers.

Miller said the door is open for De Rosario to be a veteran presence with the Canadian side when World Cup qualifying begins for Russia 2018.

Jonathan Osorio and Kyle Bekker, the Toronto FC midfield duo who impressed Miller in Canada’s May camp (Miller was outspoken in his praise for Bekker — CLICK HERE), earned callups to the senior team. Miller was thankful to the Reds for releasing four players — defenders Doneil Henry and Ashtone Morgan will also go — as the Canadian coach understands that TFC boss Ryan Nelsen will be leaving himself short.

Keven Aleman will get his first call-up to the senior team. In the case of Aleman, playing in a Gold Cup match will finally end all of the hand-wringing over whether or not he’d leave the program to play for Costa Rica, instead.

But the hand-wringing may begin over Lucas Cavallini. The striker was invited to the Gold Cup roster, but the offensive star of Canadas’s U-23 team refused the invite for “personal reasons.” Cavallini chose to stay in Uruguay, where he’s been loaned out by his parent team, Club Nacional. He has scored at almost a goal-every-other-game pace for Juventud.

“It would be easy for me to say he’s made a foolish mistake, but I will leave it at that,” said Miller. The coach said Canadian supporters need to remember that Cavallini is “still a young boy” and shouldn’t be vilified for saying no. Miller said he doesn’t believe this move puts Cavallini’s loyalty to the Canadian program into question. Cavallini is tied to Canada as he appeared in a World Cup qualifying match. But Canadians will wonder if he will put his club ahead of country in the future.

Fraser Aird, who was named to the 35-man preliminary roster, was not on the list. Last week, Miller told The 11 that he’d contacted Rangers manager Ally McCoist — the two are old friends — about Aird (CLICK HERE). The midfielder was born in Canada but chose to represent Scotland at the youth levels.

Miller said Aird is in a position where he’s committed to making Rangers’ first team as a regular, and that he hasn’t committed to either Scotland or Canada.

“The door is not closed,” said Miller. “To do so would be foolish at this time.”

The CSA can alter the roster up to June 28, when it needs to submit a final 23-man list to CONCACAF. Miller said he is working on adding a player to the 22 men already announced on Tuesday. The non-MLS players will begin training June 26 in Oxnard, Calif. Miller will join the team once the FC Edmonton NASL spring season is completed. He’s slated to be in California on Canada Day.