July 06, 2022
9 New Articles
Home Global Game CONCACAF Floro inches away from looking like a genius; instead, he’ll be under heavy criticism 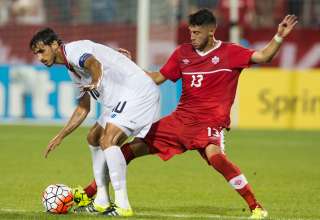 Marcus Haber fought off three Costa Rican defenders, but managed to keep his balance as he pursued the flight of a free kick lofted into the penalty area. Haber stretched out his leg, and the ball came off his knee. The ball went past Ticos keeper Esteban Alvarado and into the goal.

After a goalless 2013 Gold Cup, and two and two-thirds games of goalless attacking at the 2015 Gold Cup, the Canadians finally had put a ball into the net. And the lead. And a chance to survive the group stage. And the home team made most of the 16,000-plus at Toronto’s BMO Field — people who had endured a torrential downpour — happy.

Canadian soccer fans from coast to coast could exhale.

And then, we saw the flag. The linesman’s arm was up, the yellow flag pointed towards Haber.

Then, the replay; it showed Haber was a step ahead of those three defenders when the ball was struck. The linesman had got the offside call correct. We couldn’t even have the cold solace of a conspiracy theory.

Instead of going up 1-0, the game stayed at 0-0. It remained at 0-0 when substitute Andre Hainault was able to latch on to a free kick from Russell Teibert, but the bouncing shot was cleared off the line by Costa Rica’s Bryan Ruiz.

Two golden chances for a second-half winner. And neither paid off. In the end, a 0-0 draw that eliminated Canada at the group stage. For the second Gold Cup in a row, Canada went through an entire group stage without a goal.

There will be a lot of writers who will have their sharpened pens ready to stab Benito Floro voodoo dolls over the next couple of days. But, if Haber delays his run by a half second, if Hainault’s shot bounces a few inches higher and eludes Ruiz, well, the Canadian national-team coach looks like a genius, doesn’t he? He decided to start Haber rather than MLS super-rookie Cyle Larin. Floro also made the controversial call to bring in a defender, Hainault. with his third and final sub when Canada needed a goal — and still had forward Tesho Akindele on the bench.

Really, it’s OK to ask if we’re cursed. Maybe, when Canada won the 2000 Gold Cup, we agreed as a nation to use up a century’s worth of soccer karma. Maybe Martin Nash made a pact with the devil. Maybe Carlo Corazzin slaughtered a few too many goats.

Because, dammit, this game didn’t feel like the El Salvador or Jamaica matches, where Canada was totally disjointed. Julian de Guzman had one of his best games in years. Goalkeeper Kenny Stamatopoulos made a series of tidy saves.

Canada had chances in the first half, as well. After Alvarado made a bizarre, ill-advised punch in front of his goal, de Guzman got to the ball and aimed his header towards the far side of goal. Allvarado recovered just in time to grab the ball.

De Guzman then nodded a ball into the area for Haber, who had only Alvarado to beat, but the keeper came off the line to make the save.

And, Maxim Tissot’s free kick grazed the post; it was a curving cross from the wing, and Haber was running through the middle of the area to play the ball. These are the worst kind of situations for keepers; they have to challenge the player who is coming in to meet the cross, even though the cross is starting to bend towards goal. Alvarado had to play Haber; when the striker didn’t make contact, Alvarado could only watch as the ball bounced once and then kissed off the outside of the post.

For sure, there are plenty of criticisms to be levelled against Floro and the Canadian team. But, really, their worst offences came in the first two group-stages, when they couldn’t put either El Salvador nor Jamaica under any sustained pressure. In each game, Canada had one real golden chance on goal. That was it.

But Canada had several very good looks at the Costa Rican goal, and couldn’t convert. That’s not the coach’s fault; he can’t make a player shoot straight. He can’t make sure a Costa Rican defender isn’t standing at the right place at the right time. In fact, a couple of his gambles were very close to paying off. But that’s not going to stop the critics.

Deep down inside, we all know it’s the goat’s blood. Maybe we’ll just need to double down with Satan ahead of the next World Cup qualifiers.