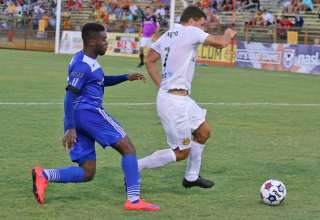 FC Edmonton is hanging back in Fort Lauderdale, the site of Saturday’s 1-1 draw with the Strikers, so it can prepare for Wednesday’s match in San Antonio, which is expected to kick off in temperatures well over 30 C.

Combine the heat with an, ahem, interesting travel schedule and the worst injury crisis in FC Edmonton history, and you have a series of headaches for FCE coach Colin Miller.

“Explain this to me,” said Miller. “We play in Fort Lauderdale Saturday, and tomorrow we’ll be flying through Tampa on the way to San Antonio. Then, we’re back in Tampa on Saturday. How does that make sense? Only in this league does this happen, I guess. I’m not sure about the stadium availability, but how does this happen?”

With FC Edmonton already the hands-down winner when it comes to NASL travel miles — and so many teams concentrated in the southeast — Miller doesn’t understand how the league can send the Eddies on a three-game road trip that takes them from Florida, out to Texas and then back to Florida. It would make more sense to schedule the Eddies on a proper road trip, where they’d play the Florida road dates in a row. That would not only help the team remain fresh, it would certainly help the pocketbook of the owner. For FCE, this will become more critical in the future, when franchises in Miami and Puerto Rico are added. NASL will need to start thinking about grouping the road games in the southeast so teams like the Eddies, Ottawa or Minnesota United aren’t punished.

When Miller worked with his team on Monday, only 13 players were available. Thanks to Gold Cup, the Pan Am Games and injuries, the lineup has been decimated.
The Eddies have just 15 players on the trip —including two goalkeepers — and used emergency signing Bruno Zebie as a sub in Saturday’s 1-1 draw. As well, the recently signed Pablo Cruz isn’t yet fit for full matches.

“We won’t have anybody arriving from Edmonton ahead of the San Antonio game,” said Miller. “We might get two players ahead of the Tampa game, but since they’re just coming back, we might only be able to use those players for 20 to 25 minutes.”

Six-goal man Lance Laing is at the Gold Cup. Hanson Boakai is at the Pan Am Games. Forwards Tomi Ameobi, Daryl Fordyce and Frank Jonke are hurt. Midfielder Ritchie Jones is out. Winger Sainey Nyassi is missing. Defender Eddie Edward played a full 90 in the fall season opener, a 4-0 win over the Scorpions in Fort McMurray. The next day, he woke up and his knee was swollen.

“It’s not like the injuries have been from overtraining,” said Miller. “I’ve never seen anything like this run of injuries. We’ve had terrible luck. Eddie goes and plays the full 90, he looks fine, and the next day he wakes up and the knee has swelled up. Ritchie Jones kicks into the turf and he’s out.”

Despite that, the Eddies top the NASL fall season table after two weeks. And credit has to be given to some of the young products. In the 4-0 win over San Antonio, fullback Allan Zebie had a composed performance against Billy Forbes, one of the quickest and most dangerous wide players in the league. Miller is hoping for a repeat performance on Wednesday.

“We can throw that 4-0 result out the window,” he says. “We know this San Antonio team is a a very good team. They beat Tampa 3-0 on the weekend.”

And Sadi Jalali — basically the only true striker on the team who is healthy — has been good. He was dangerous in the San Antonio game, scoring on a penalty and creating several other chances. His shot hit the post in Fort Lauderdale, then caromed back off the keeper and went in.

“When he hit the shot, I thought it was good enough to go in,” said Miller. “And, when it hit the post I thought ‘oh no, here we go again.’ But it bounced in off the keeper and it was nice to get the bounce this time.”

But Miller said that the play of some of the kids should put pressure on the players convalescing back in Edmonton. He’s been impressed by what he’s seen.