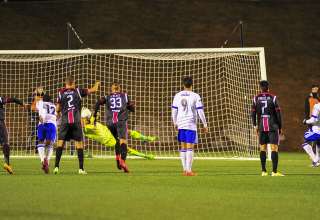 OK, so this is how it is for the brand-new, 2015 version of FC Edmonton; which looks to in no way bear any similarity to previous brands of this team.

1) The team will start off in a very shaky fashion, and will spend much of the first half trying weather the opposition. The Eddies will fall behind at this stage

2) Then, coach Colin Miller will make inspired substitutions and then, in ways we haven’t seen this famously defence-first team do before, it will explode offensively. The subs will play key roles. The game will turn.

2a) The Eddies may also have to overcome a missed penalty attempt.

We saw this script again on Wednesday; the Eddies scored three goals in just over 11 minutes to transform a game that they were trailing to the Ottawa Fury 1-0 for the better part of 80 minutes. Instead, the Eddies will head home to Clarke Stadium for the second leg of the Amway Canadian Championship first-round series with a commanding 3-1 lead.

This is what Ottawa faces; the Fury must score at least three times at Clarke Stadium. To add to the long odds, the NASL schedulemaker gave the Eddies a bye this week, so they can be fresh for the second leg, while the Fury will play this weekend at home to the Fort Lauderdale Strikers.

The game started as many Eddies games have begun this year; within the first minute, the Eddies gave up a glorious scoring chance. In Jacksonville to start the NASL season, the Eddies gave up a goal 12 seconds in. Against Carolina a couple of weeks back, keeper Matt Van Oekel had to make a great save to deny a Mark Anderson first-minute chance. In the Cup, it was Oliver Minatel’s shot that found the goal just 56 seconds after the kickoff, after the Eddies simply remained flat-f00ted off a throw-in. The ball came into the area, fell to Oliver — and the Eddies were duly punished.

Oliver could have doubled the Fury’s lead by the third minute, but headed an attempt just over the bar. The Fury kept coming in the first half, and the Eddies were lucky to see Andrew Wiedeman’s shot inch just inches wide of Van Oekel’s far post. Truth be told, the Eddies were fortunate to be down by just one at the half.

In the second half, Miller brought in Lance Laing, the normally automatic starter at left wing who was left on the subs’ bench. He brought in Daryl Fordyce to shore up the attack and Cristian Raudales to stabilize the midfield.

And, just like in the win over Fort Lauderdale, his substitution strategy was simply perfect. Laing sent a free kick just wide of goal, then went to the penalty spot in the 64th minute. But Fury keeper Romuald Peiser made a diving stop and the Fury held on to the lead.

But, what Peiser taketh away, he giveth back. In the 82nd minute, he spilled a shot from Ameobi, leaving Fordyce an easy chance to smash home the rebound. At the time, it looked as if the Eddies had simply stolen the road goal before heading home; instead, it turned out that Fordyce simply set off the explosive Eddies offence (that’s right, “explosive Eddies offence;” this is a new season, folks) and North American soccer’s version of the Kardiac Kids were just getting started.

Laing then pounced on the ball after two terrible mistakes were made in the Fury backline; veteran Julian de Guzman made a bad decision to lay off a lateral ball to centre back Rafael Alves right at the top of the Fury’s own penalty box. Alves then got caught ball-watching. Laing read the play, pounced on the ball, dashed by Alves and smashed home a second Eddies’ goal.

To make it worse, in injury time, Laing raced down the left side and laid off a ball for a wide-open Ameobi to smash into the goal.

Fordyce scored. Laing scored and set up a goal. The subs were too much.?

“Our play merited the win,” Miller said after the match. “We scored three very good goals and our substitutions have worked really well for us. Daryl was terrific when he came on; Laing was great. We will go into (next) Wednesday starting at 0-0, and we will make sure that we are at our very best.”

And, the Eddies fans will go into the game with a strange feeling; they know their team has to protect a two-goal lead, not need to come up with some kind of epic comeback.

But, methinks they are just enjoying an Eddies team that, at least in this run of form, has an offence that can go off for multiple goals in short order.