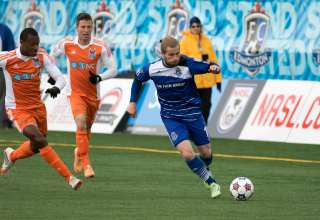 Hauksson in action against the Carolina RailHawks.

Player loans are often tricky propositions. Either a bigger club is loaning you a prospect — and the bigger club expects to see that player getting minutes. Or, a club loans you a veteran player — and that player wants minutes to prove he’s worthy of a contract in the new city or that he’s still of value to the club that loaned him out.

But, in either case, there’s an expectation that the loaned player will get significant time on the pitch with his new club. And, when he doesn’t — the loan doesn’t make sense.

Icelandic club KR Reykjavik and midfielder Oskar Hauksson cut their losses Friday; the one-year loan deal that had sent the winger to FC Edmonton was terminated before the NASL season was a month old. The Eddies say they came to an “amicable” agreement with both the player and Reykjavik.

“We’re all disappointed that it hasn’t worked out the way we had hoped,” said FC Edmonton’s head coach Colin Miller in a release issued by the club. “I couldn’t guarantee Oskar a starting position every week and a player of his experience would want to be playing every week. I can’t promise a starting spot to anyone at the moment.”

Hauksson got just one sub appearance in three NASL games and one Amway Canadian Championship match. Hauksson simply could not push his way into the starting lineup; and, as a player who is best used in wide positions, Hauksson was up against it with Lance Laing on the left side and new signing Sainey Nyassi coming up with the series of very impressive performances on the right side. Nyassi scored a goal and set up another in last Sunday’s win over Fort Lauderdale, and was named the NASL player of the week.

But, with Hauksson’s departure, an international roster spot opens up for the Eddies; and that could be an ace in the hole that Miller could use now or later in the season. The international transfer window will be open when NASL is on its midseason break.