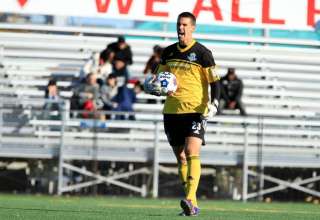 It would be hard to search more than a century of Canadian soccer history to find a situation more steeped in irony than what the Impact and John Smits face heading into the decisive match of the CONCACAF Champions League.

Last year, Smits was in goal for FC Edmonton when Patrice Bernier struck the 96th-minute second-leg penalty to give the Impact a win over the NASL side in the semifinals of the Canadian Championship. Smits and his Eddies were seconds — seconds — away from ending Montreal’s attempt to go to CONCACAF Champions League over a year ago. Seconds away from ensuring there would have been no Cinderella wins over sides in Mexico, Costa Rica and the United States

(Let’s remind Montreal fans of the six minutes of added time at home if any want to complain about any of the hometown calls that went Club America’s way in the first leg of Wednesday’s CONCACAF Champions League final, a 1-1 draw which was a fantastic result for the MLS side. But, after getting six minutes of added time at home against a lower-division club in an earlier step in this journey, Montreal fans forfeit the right to complain about any kind of hometown officiating).

As time went on, the bitterness gave way to a sense of cooperation; Smits was loaned out to the Impact for the second leg of the semifinal — and, even though the Eddies have Canadian Championship games on the same nights as the two legs of the CCL final, they agreed to loan Smits to the Impact for the games against Club America.

Now, with news that Evan Bush got a late yellow card — which, if not rescinded, would rule him out of the second leg — Smits could end up between the sticks for the Impact at the Big O, for the biggest game in club history.

Sometimes, dammit, don’t you just love this game? How it could turn enemies into strange bedfellows? How Smits’s agony of defeat against the Impact a little more than a year ago could end up having the chance to be part of the greatest victory thrill in Canadian club soccer history?

Smits won the Golden Glove for having the best goals-against-average in NASL through the 2014 season. But he hasn’t started for the Eddies this year, as the big-legged Matt Van Oekel has earned the No. 1 shirt.

Montreal will appeal Bush’s yellow card. The pragmatist will hope that CONCACAF allows him to play. But the romantic, the guy that pulls for the underdog, will think about how truly awesome it would be to see Smits play. You can’t make this stuff up.

Before he left, John told us on the Eddies beat that, despite what his friends and family might say, he’s been able to put the bitterness of last year’s loss away.

“I’m very excited to be part of Montreal making history,” he said.

I’ve known John since he first came to the Eddies in 2012 as the fourth keeper no one expected to play one minute of pro soccer. After all, he came from the University of Toronto; who comes from the CIS goalkeeping pool and plays pro? In May of that year, he won his first NASL start — and got a clean sheet — in a win over Atlanta. That night, I spoke to him and he was very emotional, talking about all the Canadian university players who never get the chance to move up; and how he felt he was proving a point for the CIS as a whole. (CLICK HERE TO SEE THAT STORY FROM THE ARCHIVE).

By 2014, the kid from Mississauga — we’d often joke about the state of some of the fields in the Region of Peel — had risen to the ranks of the top keepers in NASL. Yet, he still didn’t get called to the national side, continuing what has been a lifetime of being passed over by Canadian national programs.?? I’ve got to know John well over the years; we often speak of the struggles of Canadians trying to make it in the pros. And I can assure you about how hard he is on himself. Even after a win he’ll talk about how SOMETHING has to be better; his distribution, his kicking, his positioning. He’s so hard on himself.

I will be prepping to call the second leg of FC Edmonton Canadian Championship tie against the Ottawa Fury next Wednesday. It will be very hard for me to focus if Smits is playing in goal for the Impact against Club America, as we await kickoff for the Eddies game in the mountain time zone.

And, if Smits plays, I might have a hard time keeping my eyes dry. And, look, basically the only time I’ve cried in public is when Spock died in The Wrath of Khan. And I was a kid.