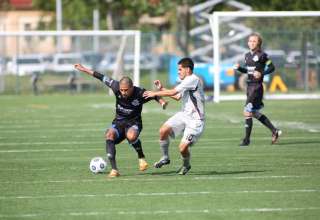 FC Edmonton now has two home losses this season against the Atlanta Silverbacks, the last-place team in NASL.

Oops — after today’s 2-0 win over the Eddies Sunday, the Silverbacks are tied with Edmonton for that distinction.

But, does a team that loses both of its home matches to Atlanta deserve a playoff spot? The answer is clear — no. On a cool, blustery prairie afternoon, Atlanta did more in the half it had the 50 km/h wind at its back than Edmonton did with its 45 minutes of wind advantage. Matt Horth scored two second-half goals as the Silverbacks all but ended FCE’s playoff hopes.

“It was a very unlucky day,” said forward Kyle Porter. “We dominated the first half but we couldn’t put anything together in the second half…

“The wind affects your touch, your judgment. And it was unlucky for us.”

The Eddies (and Atlanta, too) are eight points behind the Minnesota Stars with four games left to play. That means a combination of one Stars’ win and one Eddies’ loss guarantees that there will be no return to the postseason for FCE. And that painful end could come as early as next week, when the Eddies travel to Blaine, Minn.

But, even if the Eddies were to somehow find a way to win all four of their remaining matches, it’s all over if the Stars can find two wins out of its last four.

The wind was so strong, that Atlanta keeper Eric Ati’s kicks never made it close to the midfield line. Thirty yards was the most he could get from his boots. So, knowing Atlanta couldn’t play the long ball out of its end, the Eddies pressed forward, trying to up the tempo and sealing the fullbacks in their own end.

The result was a series of excellent scoring chances that all went begging.

Eddies’ striker Yashir Pinto had a ball fall to him after a scramble in the penalty area. Pinto was just five yards from the goal line, but not only failed to hit the target, he failed to hit the ball. He got only air and fell over — a swing and a miss — on a sitter of a chance.

David Proctor’s looping header off a corner went just over the goal.

After a foul by Atlanta’s Shane Moroney, who shoved Serisay Barthelemy in the back just outside the area, FCE’s Kyle Porter rattled the free kick off the underside of the bar.

And, Bryan Arguez ripped a left footed drive from outside the box just on the wrong side of the post.

Despite being hemmed in its own half for most of the half due to the wind gusts — with only Horth acting as a lone attacker — the Silverbacks almost took the lead right before halftime. Pinto was caught in possession, and Atlanta broke up the right wing. A shot by Paulo Mendes was pamed away by keeper Lance Parker, but the bouncing rebound fell into the path of Daniel Barrera. But the ball took an akward, topspin bounce on the turf, and bounded over his head.

Pinto was replaced at halftime by FCE leading scorer Shaun Saiko, who was coming back after a knee problem.

At halftime, Atlanta coach Brian Haynes promised that his team “would be copycats” in the second half and press Edmonton like the Eddies pressed it in the first. But, Atlanta converted two chances — and did far more with the wind at its back.

Barrera played a ball through the centre of the defence to Horth, who calmly slotted home. And, just around the one-hour mark, Atlanta was up two. Horth rose up over central defenders Paul Hamilton and David Proctor to head home a long throw from Moroney — the old demon of a set piece coming back to haunt the Eddies.

After the second goal, the life went out of Clarke Stadium, just as the life was being sucked out of Edmonton’s playoff hopes.

“That was a show of character by the boys,” said Haynes of his Silverbacks.

“At the moment, he distance between Minnesota and us is eight points,” said FCE coach Harry Sinkgraven. “It’s still possible, but we have made it very tough on ourselves.”

But Petrone summed up the game — and FCE’s season.

“If you can’t score, how long can you expect to go zero-zero?”