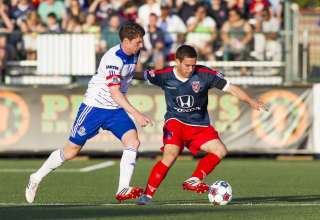 Daryl Fordyce, in white, in action against the Indy Eleven.

FC Edmonton scored three goals Saturday night. Luckily for the Eddies, two of them went into the Indy Eleven’s goal.

The Eddies got their first league win of the year, and their first road win — in either NASL or Voyageurs Cup play — since 2012, beating the Eleven 2-1 in Indianapolis. But, counting both league and cup, the Eddies have now won last three of their last four matches. Daryl Fordyce and Kareem Moses scored in a three-minute span to give the Eddies a 2-0 lead, but Indy got one back before halftime, off a free kick that ricocheted in the box and was credited to as an FCE own goal, though it was hard to see who got the last touch.

Indy had three late glorious scoring chances, one off a strange indirect free-kick incident, in the last 15 minutes of the match, but couldn’t convert.

After Wednesday’s historic 2-1 win at home over the Montreal Impact in the first leg of their Amway Canadian Championship semifinal, FCE coach Colin Miller said he hoped the result would “kickstart” what has, so far, been a poor start to the NASL season for the Eddies. FCE began the weekend in last place, with just one point out of the team’s first four league games.

And the atmosphere in Indianapolis was electric, as the club sold out it its third straight home match. Even for the visitors, the atmosphere, the likes of which hasn’t been seen in the modern NASL before, was inspiring.

Miller decided to rest Hanson Boakai, the Edmonton teen who has so far been the most compelling story of the Voyageurs Cup. Captain Albert Watson, the heart of the Eddies’ defence, was suspended. Midfielder Neil Hlavaty played only the second half of the match. Tomi Ameobi, author of the Eddies’ first goal on Wednesday, was left at home, still nursing an injury suffered against the Impact.

While Miller was able to adjust his lineup, preparing for arguably the biggest game in FCE history this Wednesday in Montreal, the Impact lost 3-0 to Sporting Kansas City in MLS play, and owner Joey Saputo tweeted after the match that changes would be coming to the franchise.

The Eddies were able to take advantage of an Indy Eleven backline that was giving away the ball like it was Christmas. In the 24th minute, defender Jaime Frias shorted a back pass to the keeper, and it was intercepted by Daryl Fordyce, who slotted a shot into the corner of the goal.

For the Eddies, a team that has traditionally struggled to score, Fordyce’s goal marked the fourth time in four matches — Cup and NASL — that the team has hit the back of the net.

Three minutes later, it was 2-0. Off a corner kick, a sprawling Ritchie Jones got to a loose ball, and directed it to Moses — who was in for Watson. And Moses took his chance, blasting an effort into the roof of the goal.

As the game progressed, Indy had the bulk of the possession. But FCE’s bend-but-don’t-break attitude, with defenders and midfielders falling back to protect the lead, did just enough.

But there were a series of scares. There was the own goal that brought Indy to within a goal. Then, in the final 15 minutes, the sellout crowd of 10,000-plus in Indianapolis had to wonder just how their team couldn’t find an equalizer.

First, a long throw into the box found a wide open Erick Norales just off the goal line, but FCE keeper John Smits snatched the ball off the attacker’s feet. Then, as Smits got up, he exchanged words with teammate Moses, held onto the ball too long, and an indirect free kick in the box was granted to the Eleven. But, after the initial touch, Kleberson chose to try to place a shot rather than blast it, and the resulting soft effort was easily cradled by Smits.

“The players started debating and the ball was still in play,” said Miller. “And quite rightly, the referee awarded the free kick. We’ve had a talk with the players about it after the game.”

Finally, in the 92nd minute, a long ball split the Eddies’ defence, Norales found himself alone in the area, but the effort went off his shin and went straight to Smits — and the keeper was able to catch the ball.

It was a nerve-wracking final quarter of an hour; but, for FCE supporters so used to seeing their team either behind or level at that late stage, they’ll take the crash course in being reminded what last-minute nerves feel like.

“We started off with a lot of pressure, we played well and, of course, it’s great to score goals,” Miller said. “But then, later in the first we sort of imploded. Then we we got back to it in the second half. Yes, we had to defend for long spells but they were committing so many players forward — and they had a crowd of more than 10,000 urging them on. We had to defend like our lives depended on it. And, with so many games over the last few weeks, I’m so proud of the players and the work they put in.”

This week will mark the fourth straight where the Eddies have both Cup and league matches.

The Eddies leave for Montreal on Sunday. Watson will join the team Sunday night, while a decision will be made on Ameobi’s status closer to Wednesday’s second leg.