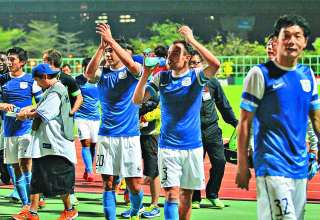 (The first issue of Plastic Pitch included a feature on Edmonton native Matt Lam’s push for a perfect season in the Hong Kong league with his side, Kitchee SC. We follow it up as the Hong Kong season comes to a close.)

Matt Lam can add the term “invincible” to his soccer résumé.

The former FC Edmonton midfielder and his Kitchee SC teammates enjoyed a 4-1 victory over Yokohoma FC Hong Kong over the weekend. With the win, Kitchee finished the Hong Kong league without a loss.

“It has been a fantastic season,” said Lam in a message from Hong Kong. “Obviously, having clinched the league a few weeks ago took away from the dramatics a bit, but we were very determined to finish undefeated. Being a part of winning a league title is a great honour in its own, but to also be one of only three teams in Hong Kong to have finished without losing a match is something I take a lot of pride in.”

Lam scored twice and played 1649 minutes for Kitchee; but one of Lam’s goals, scored in a 5-0 win over Tuen Mun, was taken away after the result was voided by the Hong Kong FA. Why? Because Tuen Mun was tossed from the league for not meeting the professional standards set by the HKFA. Tuen Mun was also being investigated for match fixing, though that wasn’t the official reason given for the decision to toss the club out of the league.

But Kitchee is still on course for a treble.

First, this week, a knockout-stage match against Indonesia side, Arema, in the AFC Cup. Lam is not on Kitchee SC’s AFC Cup roster because the club had expected him to have his domestic passport by the time it needed to submit the rosters for the tournament. The team had expected Lam to be a domestic, and had already used up its maximum allocation of foreigners. When Lam’s first passport application was denied, he became the odd man out.

Then, next weekend, Kitchee plays in the Hong Kong FA Cup final against Eastern Salon.

Lam, who represented Canada at the U-20 level, has said he is open to the idea of representing Hong Kong in the future, as he has dropped off the radar of the Canadian program.

It’s been a huge year for Kitchee and Lam, who began the campaign with a preseason friendly at home to Manchester United.