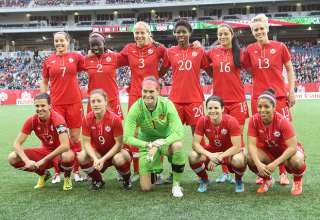 For the Canadian women’s national team, Thursday’s friendly against the United States didn’t quite feel like a preparation for the 2015 Women’s World Cup. Coach John Herdman decided to populate three-quarters of his back four with teenagers — players who could very well be playing for Canada at the coming U-20 Women’s World Cup before they get shots to play in the big senior tourney in 2015. And a large, boisterous crowd in Winnipeg — kudos to the city for doing a great job getting butts in seats on a weekday evening on a night when there’s a full slate of NHL playoff action on the TV — saw Canada take a first-half lead, only to settle for a 1-1 draw. Three teens — Kadeisha Buchanan, Sura Yekka and Rebecca Quinn — all went the full 90 for Canada. Herdman had said he needed to get his young players into friendlies against a-list opposition, but even Mr. Spock would have let out a yelp of surprise to see Canada decide to stare down Abby Wambach and Sydney Leroux with a crew of teenagers. And, while British Columbia-born Leroux, the great villain of all soccer — at least in the eyes of Canadians — got the second-half equalizer after being left unmarked in the penalty area, she wasn’t the talking point of the game. No, what we all need to be talking about was the work of those Canadian teens in the back, especially Buchanan. Yes, the Americans had some decent looks; Canadian keeper Erin McLeod was forced to make a sprawling save on a point-blank range header from Abby Wambach. And, early in the match, Heather O’Reilly was able to get inside of Yekka, dance across the top of the box, and lash a shot at goal that forced McLeod into an excellent save. But, for the most part, the American attack looked less threatening than it had in the previous two post-Olympics friendlies between the countries. And Buchanan led that charge. Buchanan scored the go-ahead goal off a corner from Diana Matheson; but that only tells part of her story. Throughout the evening, those in the stands and watching on Sportsnet gleefully watched Buchanan lay out American player after American player with a display of tackling that was wonderfully brutal. O’Reilly was sent flying by a perfectly clean challenge. Wambach spent time writhing on the pitch after a series of 50-50 challenges that Buchanan won time and time again. But maybe the best of all was, in the process of leaping above the crowd to score the goal, seeing Buchanan absolutely flatten American defender Ali Krieger like she wasn’t there. As Buchanan and her mates celebrated, Krieger hobbled to the bench, taking the long walk of shame. Now, don’t take this piece the wrong way; I’m not calling for soccer to become bloodsport. But if Canada wants to intimidate the likes of the Americans and the French and the Japanese come World Cup time, they need to send messages in friendlies that there is some meanness on this squad. Buchanan is in no way a dirty player. But she’s committed and, if you linger on the ball, well it’s your own funeral, isn’t it? Watching her mark Wambach was like watching someone draining the life energy form another person. Wambach went to the turf again and again, hoping to convince the referee to card Buchanan. But Buchanan was relentless; if the Americans’ all-time leading scorer expected respect from the teen, she got the message early. And again. And again. After the game, Herdman called Buchanan the “Christine Sinclair of defenders.” In a country where the sporting culture is shaped by hockey, it won’t take long for a take-no-prisoners Buchanan to become a folk hero, with a Women’s World Cup coming up soon. Oh yeah, and that U-20 World Cup right around the corner, too. After watching her dissect a group of American veterans, I shudder to think about how Buchanan might handle players her own age. CANADIAN SOCCER. CANADIAN STORIES. IN ISSUE 1: SELENIA IACCHELLI’S STRUGGLE TO RETURN TO THE NATIONAL WOMEN’S PROGRAM. READ PLASTIC PITCH TODAY. (Also available for Android devices at Google Play)