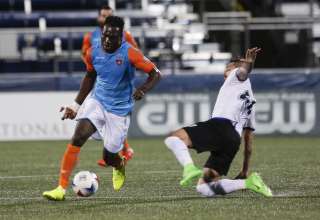 If Saturday’s game in Miami will indeed go down as FC Edmonton’s final NASL match, or, gulp, last contest ever no matter the league, it was at least nice to see that the club’s all-time leading scorer added to his tally.

Daryl Fordyce roofed a penalty kick in the 56th minute after he was brought down in the penalty area by Miami’s Michael Lahoud. But, while Fordyce’s goal marked the first time in two seasons that the Eddies have scored against Miami FC, it wasn’t enough. Long-time FCE killer Kwadwo Poku scored on either side of the Fordyce penalty, giving the home side the 2-1 win and the NASL fall title, to go along with their spring title.

You would place Poku on the list of all-time FC Edmonton-slayers, players who have tormented the Eddies over the years. Poku, Tom Heinemann, Billy Forbes, Luke Mulholland.. who would you add to the list?

Miami FC is the first NASL team to do the double since the split-season format was introduced.

Poku scored a breakaway goal early in the second half, taking advantage of a hole presented by Eddies centre back Albert Watson, who pressed forward to the middle of the park to pressure Miami’s Vincenzo Rennella. Rennella beat Watson and fed the ball into the space for Poku, who rounded keeper Tyson Farago and scored.

Poku scored the winner on a lovely piece of play from the hosts. Dylan Mares, another FCE killer going back to his days with the Indy Eleven, dashed down the wing and put a low ball into the box for Stefano Pinho at the near post. Pinho deftly flicked the ball towards the back post, where Poku was wide open to put the ball home.

“That’s our seventh game in 28 days traveling the length of the continent a few times,” said FCE coach Colin Miller. “Most people in their lifetimes don’t travel what we have in a month, so inevitably there were some tired legs there towards the last 20 minutes of the second half. But we gave it all we had in the first 45 minutes and, with a bit of luck, we’d be ahead by a goal or two at the break. I’m very proud of the attitude from the players against the best team in the league after a hard month.”

Miami, the No. 1 seed going into the playoffs, will begin its post-season campaign next Sunday at home to the New York Cosmos. FCE will return home to contemplate what has to be the most disappointing season in team history, finishing seventh overall in the eight-team league.

A year ago, the Eddies were a playoff team and set league records for fewest goals against and clean sheets.

FCE fans — players and coaches as well — will now wonder what’s next. Co-owner Tom Fath has been tight-lipped about the team’s future, not willing to publicly confirm or deny that the team will a) return to NASL if the league gets an injunction allowing it continue as a Div-2 league; b) move the Canadian Premier League, though Fath has been going to the meetings; c) fold.

“I want to defend the players to the very end and thank them for their efforts because tonight we played well in tough conditions,” said Miller. “It’s been a sad season because we believe the team should’ve been farther up the league this season. I don’t know how many games we lost by a goal this season but it has to be in the double-digit figures. We’ve not been good enough at the end of the day to get out of this situation, but we didn’t give up.”