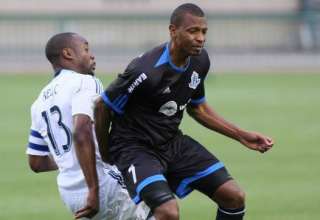 The game at BC Place will be the fourth the Eddies have played in 11 days. And fatigue was clear to see as FCE held on by its fingernails for a 1-0 win Sunday over a San Antonio team that came off a bye week. Shaun Saiko, who scored the penalty-kick decider, was named NASL Player of the Week for his efforts.

We know central defender Carlyle Mitchell has to come out, because he’s ineligible to play against the Whitecaps, because he’s on loan from them. But, as for the other changes, Miller was pretty tight-lipped.

The Eddies go into the match against the Whitecaps trailing 3-2, though FCE deserved better than the scoreline showed. Two of the Whitecaps’ goals were controversial. The opening goal stood even though Vancouver striker Darren Mattocks appeared to be influencing the play from an offside position; the second Caps’ goal came after referee Silviu Petrescu pointed to the spot after Camilo went down rather easily in the FCE box.

Miller won’t be on the sidelines Wednesday; he was suspended for the game and fined. He was sent off shortly after Camilo dispatched the penalty to tie the game, 2-2. Assistant Jeff Paulus

“I have apologized to (Whitecaps coach) Martin Rennie,” said Miller. “What I said was directed at their bench and not at the officials. But what I will say is that the player in question, I actually think he’s a fantastic wee player. And I plan to give him a hug at the end of the second leg.”

But, after giving up three road goals, FCE’s task is a daunting one.

“We know we have to keep our lineup fresh,” said Miller. “After the game in Vancouver we have a big game Saturday against Tampa. We know what we have to do against the Whitecaps. We have to score two goals and can’t give away anything. The Whitecaps will need to be poor and we’ll have to be at our best.

“Over the last couple of games, we have defended very deep for the last 10 to 15 minutes. It’s not deliberate, we want to keep as high a line as we can.”

One real advantage the Eddies had over the MLS Whitecaps in the first game was fullback play. Left back Lance Laing set up both goals and was a defensive force, while right back Edson Edward, despite heading the ball of his own post that led to Tom Heinemann’s winner, did well in maintaining the right side.

Edward also had a stellar outing Sunday, drawing the penalty after picking off a pass and drawing a foul the box — and he cut off attack after attack.

Edward said, for him fatigue is no issue going into Wednesday’s game.

“For a game like that, a player is always up for it… Absolutely, we can do it, if everyone does their job and everyone remains upbeat.”

Miller recognized how well Laing and Edward have played for the club.

“I can’t take credit for their athleticism, but we as a club can take credit for their fitness level. In modern football, the fullback is expected to join the attack as well as playing that defensive role. And I told Lance that I want to help him get back into the Jamaican national team. I know what it’s like, I was a fullback (in the Scottish Premier League). And I know what it was like to face someone like a Brian Laudrup (Rangers) or Paolo Di Canio (Celtic). You have to be very quick, and they (the Whitecaps) have a very quick player in (Kekuta) Manneh, who came in and changed the game against Dallas on Saturday.”

Miller expects Manneh to play a role in Wednesday’s match.

Midfielder Chris Nurse, who scored against the Whitecaps last week, was part of the Puerto Rico Islanders’ team that became known as the upset specialists in CONCACAF soccer. In 2010, Nurse was part of the Islanders squad that beat the Galaxy 4-1 at the Home Depot Center and eliminated Landon Donovan and co. from the CONCACAF Champions League.

“You don’t always want to talk about where you’ve played before or what you’ve done,” said Nurse. “What you try to do is give advice, to use your experience, without being overbearing.

“But it can be done. If you look at that first half (last week) we were enjoying ourselves. It was frustrating to not get the decisions. But we know if we can reduce the amount of chances they get, and we’re clinical in taking our chances, we can win. Last week, in the second half, I felt that it showed in their fitness that they’ve been playing together for months while we only had three games. This week, we have just got to be smart.”

Monday’s training session had to be moved indoors to Commonwealth Fieldhouse because of snow.