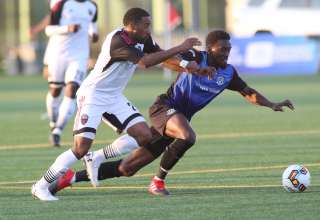 FC Edmonton captain Nik Ledgerwood didn’t sugar-coat his critique of his team’s play after the Eddies were eliminated at the first stage of the Canadian Championship for the second year in a row by the Ottawa Fury.

“It’s an absolute disgrace how we entered the game,” Ledgerwoood said Wednesday after the Fury beat the Eddies 3-2 at Clarke Field, winning the series 4-2 on aggregate. Ledgerwood then apologized to the fans in attendance, and then repeated “it’s a disgrace from us,” as if to emphasize the point.

Coming into the game trailing the Fury 1-0, the Eddies knew that they couldn’t afford to give up a road goal, knowing that they didn’t get one in Ottawa. They ended up picking the ball out of the back of their own net before 50 seconds had elapsed. Eddies midfielder Allan Zebie took a heavy touch, and Ottawa’s Sito Seoane pounced on the ball. Seoane streaked down the field and, untouched, slotted the ball past Eddies keeper Tyson Farago.

The Fury made it clear that its players were not going to be satisfied to come into Edmonton and try to sit on a lead. They pressed high with three attackers, giving the Eddies little in terms of time and space.

And, the shellshocked Eddies kept on yielding scoring chances. Seoane dashed down the middle of the field, cut past Zebie, blew past central defender Pape Diakite, and then smacked a shot off the bar. A free kick from Ryan Williams forced Farago into a good diving stop. Former FCE fullback Eddie Edward, back in his old Clarke Field stomping grounds, flashed a shot just wide.

But, at the half-hour mark, the Eddies got a ray of hope on a bizarre sequence. First, Fury keeper Callum Irving out-jumped Eddies forward Jake Keegan to get to a cross. Keegan’s momentum took him behind the end line. Irving then lost track of where Keegan was, and the forward stopped and waited for the keeper to play the ball, like a cat waiting to pounce. The keeper obliged, throwing the ball out well in front of him so he could run up and take a big kick. Keegan dashed in from behind, took the ball, and stuck it in the open net.

The Eddies enjoyed a good spell for five minutes, but then it came crashing down as a cross struck defender Albert Watson’s outstretched arm, leading to a penalty-kick goal for the Fury’s Steevan Dos Santos.

“What chance have you got when you give away two goals like that?” said despondent Eddies coach Colin Miller.

“We can’t give away such ridiculous goals as we have tonight and advance to the next round.”

The Eddies, needing three goals to climb back into the tie, threw caution to the wind in the second half, going with just three at the back and loading up the front line. They got one back at the hour-mark, as Ledgerwood made a great pass to Sainey Nyassi before the Gambian smashed the ball past Irving.

But, the Eddies’ last hopes were snuffed out when Diakite got a red card for a professional foul on Jamar Dixon that scuttled a scoring chance. Referee David Barrie checked with the linesman before sending Diakite to the showers.