July 05, 2022
9 New Articles
Home NASL & USL FC Edmonton Eddies look to rally against Fury, while the city’s eyes will be on the Oilers 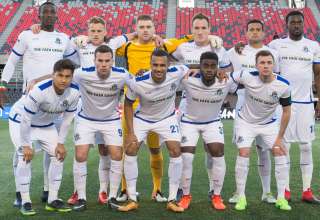 Tyson Farago (in yellow) and his Eddies teammates in Ottawa

Wednesday marks the umpteenth time a Canadian Championship game will be upstaged by hockey. Yet, season after season, the Canadian Soccer Association plows forward with a schedule that sees what’s supposed to the marquee soccer event in this country get drowned out during the sports media’s busiest time of the year. After all, the Canadian Championship, as it stands, is this country’s official soccer competition — not MLS Cup, not NASL or USL title games. Yet, the way it’s treated — it’s like the people at the top want to do their best to ensure that it never has a larger profile than as a niche event.

Tomorrow, FC Edmonton hosts the Ottawa Fury in the second leg of their opening-round series. The Fury hold a 1-0 lead. But, at the same time as the Fury and FCE throw down at Clarke Field, the Oilers will take to the ice in Anaheim to take on the Ducks in Game 7 of their Western Conference second-round match-up. It will be the most important game the Oilers have played since 2006, and so, it is the biggest sporting event for Edmonton since 2006 (and, yes, I’m including the Women’s World Cup in this). A full house of over 18,000 will be at Rogers Place to watch the hockey game on the big screen, gathering faithfully as if the Oilers were playing a home game. The bars will be packed, and not one will have an FC Edmonton game on their screens.

Yes, it’s tough on the Eddies that they’ll play such a key game during Oilerspalooza, but, come on, when the Canadian soccer domos schedule our marquee soccer tournament head-to-head against the playoffs, there’s always a chance that this kind of NHL-soccer conflict will happen in one or more of the host cities. It’s no wonder that the first leg’s YouTube feed struggled to get over 300 viewers. They gamble every year with this schedule. And, in 2017,  they’re getting burned, big time.

While the Senators don’t play Wednesday, they’re also in the teeth of a great playoff run.

If those who scheduled the Canadian Championship were let loose in America, they’d schedule U.S. Open Cup games on Super Bowl Sunday.

It’s too bad — because the Canadian sports public at large have missed some great Cup games in the past years, from Will Johnson’s broken-leg Cup winner to Eric Hassli’s wonder goal to FC Edmonton getting eliminated in the 97th minutes of second legs, two years running.

The Eddies hope they can turn over the Fury’s lead, and set the stage for another stirring game.

First off, while getting that goal back is a must, they also know they can’t concede a goal. A road goal for the Fury means the Eddies would need to score at least three. But, at the same time, the defending doesn’t matter one iota if the Eddies can’t score.

“We’ve got to think about getting that first one, and we cross the next bridge when we get to it,” said coach Colin Miller. “First of all, we have to get the equalizer, and we’ve got 90 minutes to do that provided that we keep a clean sheet. That’s our approach tomorrow night. Do the right things, make the correct decisions defensively, defend as well as we did for the most part on Saturday night (a 0-0 draw at Indy); that’s the standard we will accept, we worked on it this morning again, our approach to how we will defend and where we will defend. That will be important to give us the basis to move forward.”

The new rules for the Canadian Championship require each team to start a minimum of three Canadians — though there is no provision for three Canadians on the field at all times, which is what Miller said he would have liked to see. So, a coach can sub out his three Canadians and replace them with foreigners if he chooses. Last week, Canadian Tyson Farago got the start in goal. Neither Miller nor Farago would confirm if the second leg will see the same goalkeeping arrangement as the first.

“I really appreciated the chance (to start last week),” said Farago. “I’m looking forward to getting another chance soon.

“We’re definitely going to have to go out guns ablazing and definitely pull one back in the series,” said Farago. “I think the lads are going to take it one half at a time and try to get that all-important goal and tie it up.”

Nik Ledgerwood, who played just 45 minutes because of a groin strain, trained on Tuesday, as did defender Albert Watson, who didn’t play Saturday because he was banged up.