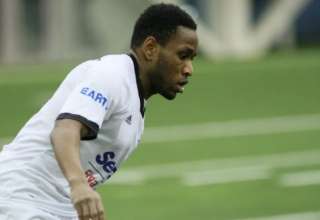 Usually, the final game of a team’s preseason schedule tells you a lot about where a coach’s head is at. The final preseason tuneup isn’t so much a match of trial and error as it is a dress rehearsal for the season to come.

With just a week to go before the kickoff of the NASL season, FC Edmonton’s final game of its preseason, a 4-1 win over Gonzaga University, gives us a decent idea of the team’s starting XI for next Satuirday’s NASL curtain-raiser in Fort Lauderdale.

Coach Colin Miller went with this starting XI and stuck with this crew for 70 minutes against Gonzaga: Lance Parker in goal, Canadian Edson Edward at right back, Carlyle Mitchell and Adrian LeRoy in the middle of the defence, with 2011 NASL Best XI defender Lance laing at left back. Neil Hlavaty played the holding mid, with Wes Knight and Chris Nurse in front of him, and Shaun Saiko, the team’s leading scorer and assist-maker in 2012, playing the No. 10 role. Up front, as Miller previously hinted would be his preferred strike partnership, was former Linfield man Daryl Fordyce, with Canadian Michael Cox providing speed and strength.

Of course, LeRoy’s name is the biggest surprise. He was with the Eddies in 2011, was released, spent 2012 in the USL with Harrisburg City, then impressed enough at the combine to earn a second life in Edmonton. He isn’t officially an Eddie yet, but he’s expected to make an official return to the club this week. And the fact he started in the final preseason game shows that he’s had an impressive audition.

And, with both team captain Albert Watson, who was pencilled in as the opening day centre back but suffered an MCL tear in training camp, and David Proctor, who has been battling a calf problem, both out of the lineup, Miller has had to do some juggling when it comes to the middle of the defence. Of course, there will be many Eddies fans who will mention the fact that 2012 NASL Besy XI defender Paul Hamilton was cut in camp.

But LeRoy looks to be the real surprise of the 2013 preseason; opportunities have opened up for him and he’s taken advantage. With a week left to go before the NASL season, FCE still has some moves to make, but LeRoy looks as if he isn’t going anywhere but on a Thursday flight to south Florida with the team.

Sunday’s goal scorers: Saiko from distance, Knight on a volley and Fordyce into the top corner before Miller made wholesale changes in the 70th. After the subs were made, Antonio Rago, a regular starter last season, set up newcomer Massimo Mirabelli for the fourth.