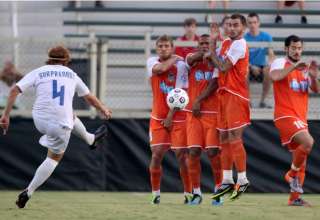 FC Edmonton would have been in tough against the Carolina RailHawks had they had to play in what we’d consider normal summer conditions.

But with the mercury at more than 100 F at kickoff, the combination of the Railhawks’ skill and the punishing heat was too much for the Eddies. Carolina capitalized on tired legs and defensive mistakes for a 4-1 game that wasn’t nearly as fast-paced as the score would indicate.

“We were only here for one day before the game,” said midfielder Shaun Saiko after the match. “It’s not something we’ve played in before, not something that we’re used to to. We practiced yesterday and it was tough. Still, it’s no excuse. Both teams have to play in this weather.”

Carolina, running away from the pack now 12 points ahead of the second-place Puerto Rico Islanders, applied early pressure, knowing that FCE might be trying to pace itself in the brutal temperatures, and the chances came.

Just a couple of minutes after kick off, NASL leading scorer Etienne Barbara turned FC Edmonton’s Chris Kooy at the touch line. But Barbara ruined his good work with a moment of selfishness; after getting by Kooy, instead of trying to move the ball to a teammate in front of goal, he fired wide from a bad angle.

Kooy was once again moved from his natural midfield position to cover at centre back, while John Jonke served the final game of his suspension.

The Railhawks had another great chance when midfielder Matt Watson found a soft spot in front of the FC Edmonton penalty area and unleashed a shot that just went over Rein Baart’s goal.

In the 14th minute, FCE central defender Paul Hamilton made a goal-saving play; a cross from Barbara was dropping perfectly for strike partner Pablo Campos in the FC Edmonton penalty area; but Hamilton got to the ball just ahead of Campos and headed the cross away from danger.

But, in the 36th minute, Kooy’s unfamiliarity with the centre back position burned the visiting side. He got caught flat-footed by a bounding ball. Campos pounced on it and simply blew around Kooy, then calmly finished the chance.

FCE coach Harry Sinkgraven said there was some confusion, as Kooy likely thought the ball had gone out of play seconds before.

“After the first 10, 15 minutes we started to play well. And that first goal was a little unlucky,” said Sinkgraven.”

“I didn’t see how it developed,” said Saiko. “But I know a lot of us stopped.”

Barbara had a great chance to double the lead just before halftime, but his wicked, curling attempt from the top of the box flew just over the bar.

In the second half, the pace continued to slow as the players laboured in the heat; but tempers did flare after Barbara looked to try and make something out of a collision with Dominic Oppong. Several players exchanged shoves after Barbara hit the turf. Oppong was late, but the call was nothing more than a foul. Carolina’s players, of course, will flock to the official any time the league’s top scorer goes to ground.

In the 67th, Carolina’s counter attack got it the insurance goal. Edmonton was caught short in the back, as Barbara barged down the right side. With only Hamilton back to defend, Barbara slotted the ball across to Campos, who chipped the ball over Baart, then followed the ball and slammed it into an open goal.

For Sinkgraven, it was especially frustrating. He had two subs on the sidelines waiting to be inserted at the next whistle, and he thinks his team may have got the boost. But before the changes could be made, Carolina had doubled the lead.

The insult was added to injury when Hamilton knocked it past Baart as he slid to try and block a low Barbara cross from making it across the box to Campos.

Down three goals, the Eddies finally got on the board. Subsitute Alex Semenets made a great pass from the left channel, where target man Dan Antoniuk was able to take it an leave it for Saiko, who slotted the ball inside the post.

“The goal didn’t matter at all,” said Saiko. “We didn’t win the game. I could score five goals and I wouldn’t care if we didn’t get the win. But that’s the great thing about this league. We have a couple of days and we get right back at it against Tampa Bay.”

Barbara got it right back with a laser beam of shot over Baart and under the bar.

The final 10 minutes played like a men’s league game, where tired legs create lots of space, and lots of goals.

“In the last 15 minutes, it was an open game,” said Sinkgraven, “We went forward looking for a goal, and we got it. But we gave a lot of open spaces in the back. And when they have players like Barbara and Campos, it wasn’t easy. It’s a pity.”

Carolina’s dominance of NASL is unquestioned. The Eddies, who have slipped into fourth, are 16 points back.