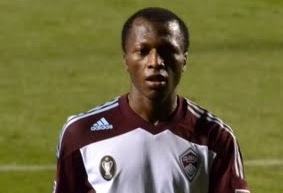 Sanna Nyassi was a role player on the Colorado Rapids just two weeks ago.

Now, he’s the MLS Player of the Week.

The North American Soccer Reporters voted Nyassi the POTW after a three-goal performance in a win over the New York Red Bulls Wednesday.

Nyassi is the new strike partner for Omar Cummings, as target man Conor Casey suffered a season-ending injury three matches ago. When Casey went down, almost every pundit out there assumed that the Rapids’ chances at repeating as MLS champs was done — and that the club’s stay in the CONCACAF Champions League would be a short one.

But Nyassi, taking over for Casey, helped the Rapids to a win and a draw this week. It might be just a blip — a case of a team playing with passion after getting a dose of adversity — but it does give fans in the Denver area hope.

How The 11 voted: We gave Nyassi our vote over Chivas USA’s Justin Braun, who also bagged a hat trick this weekend. Why? Nyassi got the three goals on Wednesday, but also had a strong game Sunday.

Even though he didn’t hit the scoresheet, he drew the penalty that helped Colorado come back from 1-0 down to New England to take a 2-1 lead, only to be pegged back to 2-2 by a late Shalrie Joseph penalty. Nyassi had the extra game. Life isn’t fair.