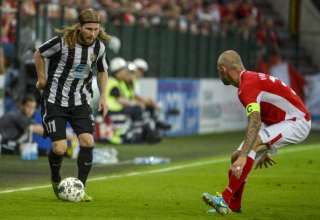 Last year in Edmonton, Iceland was all the rage. After direct-flight service to Reykjavik was launched, there were Icelandic festivals in the Alberta capital, Iceland-themed scavenger hunts, and even the Prime Minister of Iceland, Sigmundur David Gunlaugsson, came to visit. Pretty well everyone in Edmonton was either going to Iceland or knew someone who was going to Iceland. It had replaced the all-inclusive in Mexico as our vacation destination of choice.

It’s 2015, and Iceland has yet to show any signs of jumping the shark. On the day the Oscar nominations were made, the Eddies made their own Oskar announcement.

On Thursday, FC Edmonton announced that Iceland national-team midfielder Oskar Orn Hauksson will join the team on season-long loan from KR Reykjavik. The FCE front office confirmed that Hauksson cannot be recalled by Reykjavik during the term of the loan.

Hauksson started all but two matches for Reykjavik in 2014. He scored four goals. He played for Reykjavik in a 2012 Champions League qualifier against HJK Helsinki, and has also spent time with Norwegian side, Sandnes Ulf — a team which once employed Edmonton’s Tosaint Ricketts.

“This is a significant signing for us,” said FC Edmonton head coach Colin Miller in a release issued by the club. “Oskar will be a game changer and a crowd pleaser, he has good pace and good energy. I’m excited about the chance to work with him this year.”

Hauksson is still in Iceland, but will be with the Eddies when they begin training camp on Feb. 18.

Hauksson’s signing brings the total of international players (that is, players who aren’t American or Canadian) on the Eddies to seven, the max allowed by the NASL.