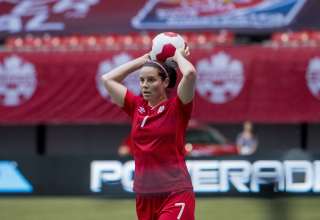 Rhian Wilkinson: Back in the NWSL,. PHOTO: BOB FRID/CANADA SOCCER

The Canadian Soccer Association will use only 13 of its available 16 allocation slots in NWSL this season.

Since the launch of NWSL, the CSA has paid the salaries of up to 16 Canadian players in that league, guaranteeing them slots in the top pro circuit in North America. On Wednesday, the list of allocated players for the 2015 season was announced, and there were only 13 names on it. (Find the list at the bottom of the document).

The CSA confirmed that it retained the ability to allocate up to 16 players in 2015. A CSA representative told us that some of the player who could have been allocated have chosen instead to pursue other opportunities outside of NWSL.

According to the CSA, “Canadian National Team players will remain in the Centralized Development Program to begin and train in that environment throughout the season, but will have the opportunity to participate in the first three to four NWSL matches before the start of the FIFA Women’s World Cup. The NWSL will also a take brief 12-day break during the group stages of the FIFA Women’s World Cup 2015 in Canada.”

Midfielder Desiree Scott, who left NWSL last season to play in England with Notts County, is not on the allocation list. In the current issue of Plastic Pitch, she said that she will decide where she will go after the Women’s World Cup, but was enthusiastic over a possible return to England. Interestingly, Rhian Wilkinson, who withdrew herself from the NWSL last season, will return in 2015.

Last year, Canada allocated 16 players but ended up needing to use just 14 spots. Midfielder Selenia Iacchelli’s knee problems ruled her out of the Western New York Flash’s roster, and Scott’s move from Kansas City to Notts County came after the initial list of 16 came out. John Herdman, coach of the national women’s team, chose not to replace either player. He said that he simply didn’t have any out-of-contract, pro-eligible players who could legitimately take those vacant spots. This year, FC Kansas City does not have any Canada-allocated players.

“At this stage, we don’t have that depth of talent,” Herdman said last year. “My commitment is to put the best Canadian players in that league, and I can’t make that commitment at this point.”