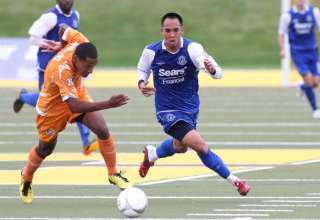 FCE simply dominated, outnumbering Puerto Rico midfield and bossing possession. Puerto Rico, which played Sunday night and then had to make the 5,600-km trek from the Caribbean to Edmonton, didn’t look like it could keep up with Edmonton’s pace.

Edmonton is now 6-4-1 on the season, and took over second spot in the league.

While assistant coach Dave Randall said at halftime that Edmonton was sticking with a 4-3-3, it looked through long periods of the first half that Dan Antoniuk was placed up top, a lone sentry asked to hold up balls, while wingers Shawn Chin and Kyle Porter were withdrawn, helping FCE outnumber Puerto Rico, which was pushing three men forward and was losing the majority of the battles in the middle of the park.

Before the 10-minute mark, Edmonton opened the scoring. Porter looked to be squeezed out at the right sideline by two Islanders’ defenders. But, he was able to turn and bully his way through, then laid a perfect low cross to the front of goal for Chin to side-foot in.

After another great Porter run up the right, FC Edmonton earned a corner. Antoniuk, who had worked hard throughout the half, got his head to the ball. Defender David Foley tried to clear the ball from danger, but his attempt crashed off the back of PR keeper Ray Burse and into goal. Antoniuk got credit from the official scorers, even though it was clearly and own goal.

“If the shot is on net… it’s a goal. I don’t care. You can give it to whoever you want,” said Antoniuk after the game.

FCE defender Paul Hamilton had two fantastic chances to score; a volley was tipped over the bar by Burse, while a shot later in the first half was scrambled off the goal line by the Puerto Rico defenders.

Nicholas Addlery had a chance to replay for the visitors, striking the post with a shot after FCE defender John Jonke fell down on the Foote Field artifical surface, which gets more slick as the temperature drops. Game time temps fluctuated between 12 and 15 C.

But a nightmarish second-half sequence from Puerto Rico defender Jamie Cunningham turned what should have been a 2-1 game into a 3-0 match.

Early in the second half, FC Edmonton keeper Rein Baart pushed the ball right into Cunningham’s path. Cunningham had the keeper at his mercy, but from less than a couple of feet from the goal, he headed over the bar — an incredible miss.

About a minute after the miss, Cunningham hauled Chin down in the Puerto Rico penalty area. Shaun Saiko converted the penalty to put the game out of reach.

Antoniuk was named man of the match for his hard work, holding up the ball and being credited with the goal. He credited Saiko for coming in and picking up a lot of the balls that he was able to hold up.

“It’s easier to beat people without the ball than with the ball,” said Antoniuk.

Antoniuk said the big difference between this win and Friday’s 1-0 loss to Carolina was the class in the final third. FCE was able to finish its chances.

“It’s a very important three points. The last game we played, I thought we played all right.”