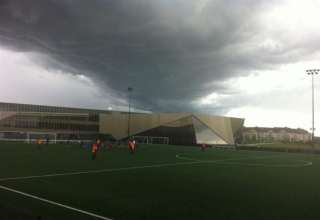 Clouds loomed over Clareview as the Eddies cut practice short.

FC Edmonton’s Thursday afternoon training was brought to a premature end by threatening clouds that promised — and later delivered — lightning and hail.

But, despite the clouds in the sky, coach Colin Miller’s outlook was positively sunny.

His team is undefeated in the NASL fall season despite yet setting foot in Clarke Field, their home stadium. The Eddies have won one “home” game in Fort McMurray and got a win and two draws on the road. This Sunday’s match against Atlanta will mark FCE’s first true home game of the fall season.

As well, the Eddies are getting players back to health. Tomi Ameobi, the team’s top-scoring striker, hasn’t played since the spring season, but trained Thursday morning. Ritchie Jones, who’s been out with an ankle problem, is training. Youngster Hanson Boakai is back from the Pan Am Games. Striker Daryl Fordyce was on the pitch.

The Eddies got off to the four-game undefeated streak with basically a skeleton squad. Now, Miller looks to only be missing two players — albeit key players — for Sunday’s match. Lance Laing will be in Jamaican colours for Sunday’s Gold Cup final, and winger Sainey Nyassi continues to recover from a hairline fracture in his ankle.

Jones said that the team’s recent strong performances don’t make it a sure thing that he’ll get minutes now that he’s moved out of the MASH unit and back into the squad.

“It’s been great for the squad; I’ve been involved in so many squads in the past and it’s great to have competition for places. The boys have done so well on the road. It’s great to see and it’s started us off in good stead for the start of the [fall] season.”

Miller said changes could be made to the lineup for this Sunday’s game; but, as any NASL coach would, FCE’s gaffer wouldn’t guarantee who will play and who won’t.

As well, Miller had the team working the ball through what could be a packed midfield. He noted that Atlanta coach Gary Smith went with a 3-5-2 against Ottawa, not a 4-4-2, and the Eddies will need to be ready for a Silverbacks side that won’t play quite the same way it did when it came to Edmonton (and lost) in the spring season.

“It’s very critical,” said Jones. “We just have to mirror what we did in the second half of last season, we started to win those games at home and turn our stadium into an unbeatable home ground for us.”

The Eddies lost just one home game during the 2014 fall season.