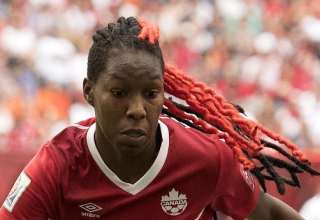 It’s easy to forget that Canadian centre back Kadeisha Buchanan is months away from her 20th birthday. She’s was named the top young player at the Women’s World Cup, and her name is an automatic to appear in the Canadian starting XI.

But, in Friday night’s Pan Am Games bronze-medal match, we were reminded that she still has a lot to learn.

We were reminded that, despite all of her talent, she’s been rushed into a national team that has very little depth on the back line. In Canada’s 2-1 loss to Mexico, Buchanan endured maybe the worst half she’s played, like, ever, for Canada.

She was taken out of the game at halftime. It could have been an injury, could have been tactical. The reasons weren’t given. But, let’s be clear — if the reason was strictly based on performance, she earned her spot on the bench. Her first half was a reminder that no player can get by on talent alone. It was a lesson that speed and strength can only get you so far — a defender also has to make the right choices.

Early in the match, keeper Stephanie Labbe bailed her out. She was defending a two-on-two break with fellow defender Rebecca Quinn. But, for some reason, Buchanan decided to leave her mark, Mexican striker Monica Ocampo. Buchanan was overly aggressive, and got caught in-between when she decided to try and step up to help out Quinn rather than stay at home. Of course, the ball went to Ocampo, now left wide open in the box, and Labbe did well to make the save. Buchanan can’t be faulted for the Mexicans’ first goal. She was up to try and meet a corner kick from Janine Beckie; the Mexicans got the ball put of the box and lumped the ball up the field. Ocampo flicked the ball with her head, just nudging it past Quinn. Now, all Ocampo had to do was blow by Quinn and she was on the break. There’s no match in the players’ top speeds: Quinn never had a chance. Ocampo lobbed the ball over Labbe and Mexico had the lead.

Before halftime, Stephany Mayor would get credit for Mexico’s second goal; a desperate clearing attempt from Jessie Fleming crashed off Mayor’s shin guard and went into the goal. But, as Mexico pounced on a giveaway in midfield to start the attack, Buchanan was out for a wander, picking up no one. When the ball got into the danger area, she had to do one of two things:

1. Attack the pass which led to Fleming’s desperate clearance;

2. Or, identify Mayor as a threat and give Fleming the help that she needed. Mayor was coming up through the middle of the penalty area; there’s no way a centre back can say that’s not her job to pick up that attacker.

Fleming got a late penalty-kick goal to make injury time a little more interesting. But the first-half put Canada into too deep a hole.

Look, young defenders are overly aggressive. Anyone who saw Doneil Henry or Mallan Roberts in the early stages of their professional careers know that young centre backs are often guilty of trying to do too much. They will go off and try to win balls away from where they should be; they’ll try to give help to fellow defenders who are better left off to handle their jobs on their own.

Buchanan has been very, very, good for Canada in the early stage of her career. There’s no arguing that. But, Friday’s loss might be a building block she needs. Since she came into the Canadian starting XI, she’s been basically untouchable. She hasn’t been criticized. While a bronze medal would have been nice, the lasting effects that this reality check might have on Canada’s best young player could pay lasting dividends into the future.

ISSUE 6 OF PLASTIC PITCH… OUT NOW!

Rob Friend, sports director for Pacific FC, said that when he and coach Michael Silberbaue…