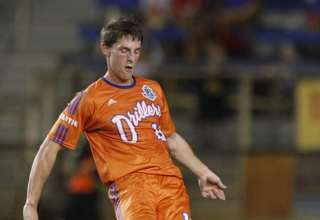 It was only fitting that FC Edmonton’s final match of the NASL season ended in a 1-1 draw.

After all, it was the scoreline that best represented the team’s season. It was the 11th time the team played a 1-1 draw.

The 11th 1-1. This game should have happened on the first of January.(And, of course, this game is being reported on The11.ca).

But after the Fort Lauderdale Strikers started off strong, and got a penalty-kick goal from Carlos Salazar, the Eddies got better as the game went on, went up a man, and got the equalizer from sub Massimo Mirabelli. The Brampton, Ont. native poked the ball through the legs of Richard Sanchez.

Based on the first 20 minutes of the game, though, and anyone watching would have predicted a Strikers’ blowout. Playing at home in the heat and the humidity, the Strikers had several chances in the first phase of the game.

But FC Edmonton coach Colin Miller was furious that a game that was scheduled to start at 7:30 local time didn’t actually get kicked off until 7:52. Teams base their warm-ups on the projected start times, and he felt that his team went cold waiting for the Strikers’ players to be introduced one by one.

“It was an absolute circus,” Miller said of the pre-game festivities in Fort Lauderdale. “We go off the field at 20 minutes past to get ready for the game, we’re ready to go at 7:30 and we’re waiting for almost half an hour. Anyone involved in professional football knows that’s too much time to wait.”

Referee Sorin Stoica added, ahem, intrigue to the match before the 10-minute mark. FCE defender Albert Watson slid to block a shot, and Stoica ruled it a hand ball. The question: If Watson dove to block a shot, is there a way he could have actually played hand or arm to the ball?

In the 11th minute, Striker Ivan Guerrero’s cross found a wide open Yaikel Perez at the back post, but he headed wide despite having an open side.

But, as the half went on, the play swung in the favour of the team wearing the orange Drillers third jerseys. Edem Mortotsi, getting the start, had a wonderful chance to equalize. After the ball clanged around in the area, it fell to Mortotsi just a few feet from the goal line; but the local product blasted it just high.

Daryl Fordyce then fired a shot just inches over the bar.

In the second half, FCE kept up the pressure. After a corner kick, the ball came to Corey Hertzog at the top of the box, but his shot deflected off the head of Fort Lauderdale defender Rafael Alves, who didn’t seem to know much about it.

Then, after he’d come in as a sub, Mirabelli had a wonderful chance, set up by a great run from teenager Sadi Jalali. Jalali slipped the ball to Mirabelli, but Sanchez made a great lunging stop.

But, for those wondering if the Eddies were going to have the fates go against them again, Striker Gonzalo de Mujica put is team under even more pressure. After a lunge on Neil Hlavaty, de Mujica saw straight red and headed for the exit.

Finally, Mirabelli got the chance in the clear and buried it.

“After the first 20 minutes of the game, which was the time it took for us to get settled, I thought we thoroughly deserved to win,” said Miller. “No disrespect to this Fort Lauderdale club; I watched the video of them absolutely battering Atlanta a couple of weeks ago (a 6-2 result). This is a good team. But after that first 20 minutes, I didn’t think John Smits had a save to make. I felt we deserved the three points. We had an 18-year-old (Jalali) starting at centre forward, we had a 20-year-old starting (Mortotsi) and a 17-year-old come into the game (Boakai). And they are all local products. When I see that I have to say that the future is bright for this team.”

What Miller wouldn’t comment on was the midfielder who didn’t make the trip — Chris Nurse. The midfielder was dropped from the travelling roster and then tweeted to fans that he was unhappy with the coaching staff and had played his last game for the club.

FCE made Nurse a contract offer last week, but no deal was made. And the terms of the offer haven’t been disclosed.