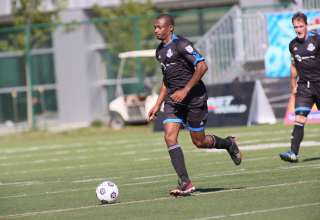 FC Edmonton veteran midfielder Chris Nurse has confirmed he won’t be back with club in 2014. Nurse, who was named the team’s MVP by his teammates and captured an NASL Player of the Month award this season, issued a statement to his followers and FCE supporters on Sunday.

His statement is included in its entirety:

Thank you very much to FC Edmonton, Mr. (Tom) Fath and FC Edmonton Supporters Group (ESG) for bringing me to Edmonton and allowing me to achieve so much as a player both on and off the field.

I met some fantastic people in this city, and the team has some exceptional talent and some youngsters with real bright futures. The players nicknamed me “baba” and, yes, ha ha, I did beat them at times, but only in jest and in love. They are my brothers and I am grateful to have been blessed to meet new friends for life.

Personal development and character building are goals of mine and my time here contributed substantially to that. I developed so much as a person over the course of the year. There was no greater reward for that than being voted FC Edmonton players’ player of the year by my teammates and to also be nominated by the league’s head coaches to be placed on a shortlist with 14 of the best players for the 2013 North American Soccer League MVP award.

(Ed. note: Defender Albert Watson was the other Eddie on the shortlist.)

Spending time raising awareness for breast cancer, reading stories to underprivileged kids and feeding the homeless were some of my highlights off the field and truly humbling.

In a meeting with the general manager on Monday October 28th, 2013, I was offered a contract extension and given a deadline of today to come to a decision. Unfortunately, I will be moving on next season.

I wish the organization all the best for the future. Keep posting the Lance Laing Photos, LOL. You guys are the best.