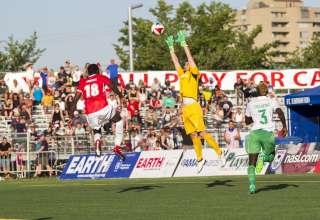 FC Edmonton’s roster was depleted; the team had just a keeper and 12 outfield players healthy enough to play. Thanks to omissions, injuries and Gold Cup call-ups, the New York Cosmos brought a squad to Edmonton that looked nothing like the kind of team we see in NASL week in, week out.

Thanks to a 79th-minute goal from Eric Calvillo after a mad scramble in front of the FC Edmonton net, the Cosmos came away with a 1-0 win on Saturday night.

The Eddies debuted a special Canada 150th-themed red third jersey, and Clarke Field was packed in sweltering 30 C conditions. But, despite the big crowd and special occasion, the home side fell flat, and closed out a disappointing spring season with its fifth 1-0 loss out of its last six games.

“We had our biggest crowd of the year and we put in one of our poorest performances in the second half,” said Eddies coach Colin Miller.

The goal wasn’t a thing of beauty. Danny Szetela sent a low ball into the penalty area, and two New York Cosmos players — Calvillo and Juan Guerra — were left unmarked right in front of the FCE goal. Calvillo got a touch on the ball, but it went off Guerra’s shin. The ball spun off of Guerra and slowly towards the FCE goal line. Keeper Tyson Farago reached towards the ball. But, before the keeper could bring his gloved paw down on the ball, Calvillo, on his back, stretched out his leg so he could toe-poke it across the line. The ball rolled oh so slowly across the line and in.

But, referee Juan Marquez waved the goal off. The linesman’s flag was up. Calvillo was offside. Or maybe it was Guerra. Then, Marquez was surrounded by Cosmos players, he went to talk to his linesman, and changed his call. He pointed to the centre circle, giving the Cosmos the goal.

The ball went off Calvillo, Guerra and Calvillo in quick succession. Offside or not, it’s easy to see how a linesman and a referee could have been fooled. The ball took two glancing blows before a player on his back toe-poked it in. It happened so fast, in the midst of a group of players in the penalty area.

But, the cold hard fact is that both Guerra and Calvillo were left unmarked in front of the FCE net. And that’s what Miller focused on in his post-game comments — that it was “shocking defending.”

From his angle in the coaching box, Cosmos coach Giovanni Savarese said he saw “a lot of players behind the ball” and thought right away that his team had scored a good goal.

After a 2-1 win over North Carolina FC last week, Miller had hoped that his team had turned some kind of corner.

“Too many players were the polar opposites of what they were last week,” Miller said after the loss to the Cosmos.

The Eddies began the game with just four players on the bench. Of those, only midfielder/forward Jake Keegan and keeper Chris Konopka were completely healthy. Nik Ledgerwood came in as a late sub, but Miller knew going in that his captain was only healthy enough to play 15 minutes.

With both teams having thin rosters, the heat was an even bigger factor. Neither coach had many options. So, the first half was played at a slow pace. ‘

Ryan Richter had a good chance to give the Cosmos the lead. He was unmarked off a corner, but headed the ball well over.

The Eddies had two very good chances to score in the first half; Sabri Khattab got his head to a Ben Fisk free kick, but Cosmos keeper Jimmy Maurer did well to leap and tip the ball just over the bar.

Then, late in the half, an awful headed back-pass attempt from Cosmos defender David Ochieng was intercepted by Eddies’ striker Tomi Ameobi. Maurer charged off his line and Ameobi elected to try and chip the Cosmos keeper. His attempt went high and wide.

The Eddies went through the second half without generating a real threatening shot on target. Meanwhile, before the Cosmos broke through, keeper Tyson Farago made an excellent stop to deny Calvillo, after the New York attacker waltzed through three FC Edmonton defenders to give himself a fantastic scoring chance.