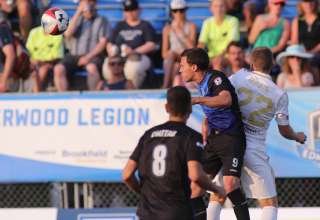 When the NASL season started, Ben Fisk slid down the FC Edmonton depth chart. Coach Colin Miller wasn’t impressed with the Canadian midfielder’s early-season performances, and Fisk saw his name go from the starting lineup sheet to the subs bench.

But, as we near the end of the NASL spring season, Fisk has re-established himself as a starter. In last week’s 2-1 win over North Carolina FC, Fisk set up Tomi Ameobi’s equalizer with a perfect cross, and played his best game of the season — he was a constant threat coming in off the left wing. He didn’t stop attacking. He didn’t stop pressing for the ball. After the final whistle, Miller had high praise for Fisk, saying that the player “epitomized everything about the club.”

Fisk and his FCE teammates will try for two wins in a row to end the spring season when they host the New York Cosmos Saturday night.

“I felt in preseason that I was doing really well,” Fisk said. “And then I kind of fell out of the team a bit. Now that I have gotten myself back in, I feel that it’s taken a few games to kind of find my feet, to find my full 90-minute fitness. I think in the last couple of games, I’ve done a lot better, and I think Carolina was one of my better games so far. Hopefully I can build off of that.”

The Eddies beat the Cosmos in Brooklyn earlier this season; it was a wild 4-2 win that saw two New York players sent off by referee Geoff Gamble.

“We were up 2-1 before they had their two guys sent off,” said Fisk. “Say what you want about the game, but I thought we played well and I think we can do the same thing here on Saturday night.”

The Eddies already-long inactive list got new additions this week. Goalie Nathan Ingham, who had to leave the game after getting into a high-speed collision with NCFC winger Lance Laing last Friday, is back home in Ontario tending to a concussion and injured shoulder. Central defender Pape Diakite is unavailable for the Cosmos match — as he’s accumulated enough yellow cards over the season to earn a one-game suspension.

The Cosmos, of course, will be without Canadian defender Dejan Jakovic, who is representing Canada and the Gold Cup.

“We had to do a lot of work to beat Carolina last Friday night, and we’ll have to do even more work if we want to get three points against the Cosmos on Saturday,” said Miller. “But the spirit is great in the group; it has been all season long. It’s just been the difference from finding a way to get beat and finding a way to win. We managed to do that on Friday.”