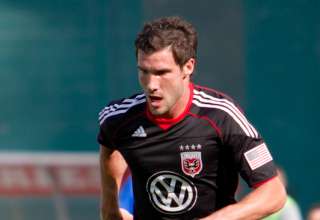 Another match, another slow start for Toronto FC. The Reds found themselves down two goals after just 10 minutes on Saturday night against D.C. United, and the deficit proved to be too much for TFC to overcome in an eventual 3-0 loss.

“It’s not good to start that way,” said defender Danleigh Borman. “It’s really tough on a team and it’s really tough to get back from that. I think the guys tried to fight back but unfortunately it didn’t happen for us today.”

Though this MLS season is still young, Toronto has already fallen into a pattern of getting games off on the wrong foot. TFC has been consistently disorganized on both the attacking and defensive fronts during the first 20 minutes of their games. Sometimes TFC is able to weather the storm, as it did in Wednesday’s scoreless draw with the L.A. Galaxy. Against United, however, the Reds weren’t as fortunate.

It took just five minutes for D.C. to get on the board. Midfielder Chris Pontius took a pass just outside the box, blew right past right back Jacob Peterson and fired a shot that found the back of the net. Peterson, who usually plays in the midfield, got the start at right back in yet another reshuffling on TFC’s back line. Peterson got the nod over defenders Nana Attakora and Dan Gargan, both of whom have looked ineffective thus far in the season, but the position switch backfired early on Pontius’s goal.

Five minutes later, it was a regular defender who was victimized. Borman attempted a floating pass at midfield that was cut off by United’s Charlie Davies, who broke towards the net with fellow striker Josh Wolff. Davies passed to Wolff, whose initial shot was blocked by Toronto goalkeeper Stefan Frei, but Davies was there to bury the rebound. It was the league-leading fifth goal of the season for Davies, who remarkably hadn’t started a game until Saturday. It was Davies’s first start of any sort since he played 90 minutes for the United States in a World Cup qualifier with Honduras on October 10, 2009. Three days after that game, Davies was in the infamous car accident that almost cost him his life and kept him off the pitch for over a year.

As if being down 2-0 wasn’t enough, TFC also lost Adrian Cann on the play. The centre back had to leave the game with a rib injury, forcing head coach Aron Winter to make a substitution (Attakora) much earlier than intended. The change to the club’s substitution plan meant that Julian de Guzman played his first full game of the year. De Guzman, who underwent knee surgery in the offseason, has been brought back slowly, playing 45 minutes in each of his first two games and 65 minutes against L.A. on Wednesday.

The good news for the Reds amidst this otherwise disappointing match was that de Guzman appeared up to the task.

“I didn’t expect to play the full 90 but I’m ready to do whatever needs to be done,” de Guzman said. “That I did my full 90 with no pain and no negative reaction to the knee is great, but at the end of the day, the result is nothing to be proud of.”

As has been the case for Toronto, it shook off the cobwebs after the first 20 minutes and actually controlled the latter part of the first half. Attakora came close to scoring on a pair of setpiece plays late in the half, shooting wide on his first attempt, and then missing the target on a header. De Guzman speculated that, as a team, his side isn’t completely focused from the opening whistle.

“Mentally, I think a lot of us aren’t there and it becomes a chain reaction as you see on the pitch in the first 15 minutes,” de Guzman said. “We’re so slow to react, we’re unable to penetrate, we’re not picking up the second balls. It’s the small details like that that make the biggest difference.

“This is something we have to learn mentally. We have to psych ourselves up as a team before the game and come out with fire…It’s a shame to leave the fans disappointed like that.”

TFC’s comeback hopes were seemingly extinguished when defender Ty Harden was ejected following a red card in the 49th minute. With Pontius racing impeded towards the box, Harden had to slide to make the tackle, thus getting himself ejected for denying the opportunity. The Reds argued the referee’s call, but to no avail. In the 20 minutes following the red card, however, Toronto was clearly the better team and looked like it was on the verge of cutting the deficit in half. Peterson had a header in front of the net that was deflected in the 62nd minute, and just moments later, captain Maicon Santos was sprung on the right side for a shot that went wide.

United hadn’t had a shot of any sort since Davies’s goal in the 10th minute, but the Washington side eventually overwhelmed the 10-man Reds. In the 73rd minute, midfielder Fred delivered a nice cross to Pontius on the left side of the field. Pontius collected the ball, stopped in place to freeze substitute defender Gargan, and fired past a diving Frei and inside the right post.

All six of United’s shots in the game were on goal, and Toronto actually outshot D.C. by a 12-6 margin. Though the Reds were short a player for almost half the game and short on the scoreboard for almost the whole game, the improved effort in the second half seemed to annoy Winter even more.

“In the second half with 10 men we were playing better than in the first half with 11. That makes me upset,” Winter said. “The way how we started, we lost all the second balls and we were not sharp enough. It’s strange because the last two weeks we were playing well. Today we got outplayed.

“You can always lose a game, but the way we lost the game, I didn’t like it. I’m upset about it.”

Winter went so far as to say that his team’s best player on the day was the 12th man — namely, the 16,313 fans in attendance at BMO Field. The supporters braved a sub-zero wind chill to root for their Reds, but weather notwithstanding, the relatively small crowd has to be troubling to TFC management.

It doesn’t help morale when the home side has fallen behind before some fans have even gotten to their seats. Of the nine goals Toronto has allowed through their first six games, four have come in the first 15 minutes of matches.

“Every game you play in MLS the most important moments are the first 15-20 minutes,” de Guzman said. “We have to use the home advantage and the fans behind us to our advantage, and we didn’t do that.”

The loss snapped Toronto’s four-game (1-0-3) unbeaten streak, and TFC has now played 243 minutes without scoring a goal. The man who scored that goal was striker Alan Gordon, who missed his second straight game with a groin injury. Winter seemed optimistic that Gordon would be available for next Saturday’s game against Columbus, though he noted that Cann’s injury “looks bad” and the defender will undergo more in-depth tests tomorrow.