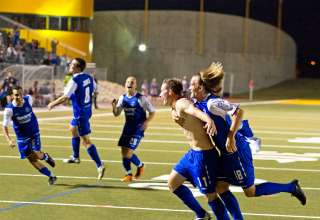 A last-gasp header from substitute Paul Craig has guaranteed FC Edmonton a trip to the NASL playoffs.

Craig scored at the death, heading home a corner from Shaun Saiko to give the Eddies a 2-1 win over the last-place Atlanta Silverbacks, who were reduced to 10 men at the half-hour mark.

Combined with Montreal’s 1-1 draw at Puerto Rico — thanks to another last-gasp goal, this time a penalty from Islander Jonathan Fana — FCE’s win guarantees that the Impact can no longer catch the Eddies.

“It was a great corner by Shaun,” said Craig. “We decided to take it quickly. I was lucky to be in the right place at the right time.”

Craig’s goal rescued a game which the Eddies looked to have let slip away. Up a man and up 1-0 late in the game, FC Edmonton striker Michael Cox blew a marking assignment on a free kick from Silverback Ciaran O’Brien. The free kick sailed over the Edmonton defenders and onto the foot of fullback Tyler Ruthven, who had blown by Cox to get open at the far post. Ruthven had an easy time slotting the ball in.

Up to that point, it looked like an early second-half marker from FCE forward Kyle Yamada would be enough to give the home side a win in front of 1,868 at Foote Field on am unseasonably hot, muggy September evening in Alberta. Yamada made a great run down the left channel and slotted home a low shot inside the far post to give FCE a deserved lead.

From the opening kickoff, Edmonton bossed possession as the Silverbacks, just playing out the string, was happy to settle back and defend. Still, there were warning shots; centre back John Jonke, who enjoyed his best game in an FC Edmonton uniform, headed just wide off a corner.

Later in the first half, Jonke threaded a beautiful through ball for forward Kyle Porter, who went for placement instead of power as he dashed behind the Atlanta back line. His effort, oh so slowly, rolled and came off the post. Atlanta keeper Jimmy Maurer pounced on it before Cox could get to the ball off the woodwork.

Atlanta’s predicament got from bad to worse at the half-hour mark. FCE keeper Rein Baart played a long ball over the Atlanta backline, and it checked up with a high bounce on the turf for Cox. Defender Patrick Robertson brought the striker down, and got the red card and an early trip to the showers.

FC Edmonton didn’t take advantage of being a man up through the rest of the first half; playing at Foote Field, the smallest pitch in NASL, Atlanta was able to pull all of its men back and clog its own end of the field.

After Edmonton took the lead, Maurer made several key saves to keep Atlanta’s hopes alive, the best coming on a swerving drive from Ilja Van Leerdam.

Then, with Edmonton’s hopes looking all but dimmed — Saiko made a run down the right side and was able to unleash a wicked low drive that Maurer was able to get in front of — but not control. The ball went behind for a corner, and Craig was the hero.’

Jonke said it was nice to get a goal on the set piece rather than give one up.

“We always seem to be letting goals in on set pieces. We have to figure that out.”

And Jonke admitted it was frustrating to play against an Atlanta side that was packing the back.

“When you play against 10 men, who were already sitting back because they didn’t have too much to play for, when they go down they are going to sit back even more.”

Now, FC Edmonton’s Sunday match to Fort Lauderdale will see the team try to make a push for third or fourth place (it is currently in fourth, a point behind FC Tampa Bay) and a home game in the first round of the playoffs.

And it’s been a fantastic run for Prince Edward Island-bred players. On Tuesday, Mozzi Gyorio scored a free-kick winner for FC Tampa Bay. On Wednesday, his best friend scored the winner for FC Edmonton. Canada’s smallest province is surely making some noise at the NASL level.