March 04, 2021
9 New Articles
Home Global Game CONCACAF Hart says he would like to see national team move around the country … if it could 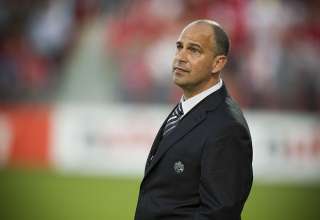 BMO Field did its best job so far hosting the Canadian national team, with 11,000 partisan supporters coming out to cheer the home side last week as it opened up World Cup qualifying against St. Lucia.

But national coach Stephen Hart made it clear in a conference call Thursday that he thinks the atmosphere can get a heck of a lot better — and if it wasn’t for the travel issues, he’d prefer to have the team move around Canada rather than call Toronto its sole home.

“Canada’s football team, and its sports teams, belong to Canada,” Hart said. “I would like to be in a position where we can move the team around, but we have to do what is necessary to qualify.”

Because many of the players are based in Europe or in MLS, they can get direct flights to Toronto; many of the MLS players don’t have to even leave the Eastern time zone. If the team was to base more games in Edmonton or Vancouver, that means more travel. Visiting CONCACAF nations outside of the Mexico or the U.S. have more domestic-based squads than Canada has, so travel is easier. So, going to a city where players have to connect to get to puts Canada at a bit of a disadvantage.

But Hart made it clear that he’s frustrated that the national team isn’t getting more attention — or more supporters. Canada opened up the preliminary round of CONCACAF qualifying with group-stage wins over St. Lucia (4-1 at BMO Field) and on the road in Puerto Rico (3-0 on Tuesday night).

“That sort of 12th man doesn’t exist,” Hart said of playing at home.

But it’s important to not that Hart did acknowledge the passion of the supporters who were on hand for the Friday win over St. Lucia, and the various community soccer clubs who came down to BMO Field to cheer the home side. But it’s clear that he wants the 11,000 supporters to swell to a full house, no matter the opposition. He wants to see Canada’s quest in the world’s largest and most important sporting competition get more attention and headlines.

Hart is likely right about moving the team around; Canada is a massive country and, like the United States, could host the team in various stadiums around the country. Supporters simply can’t make the trip from Vancouver to Toronto on a regular basis. You can’t use the European example. Outside of Russia, the countries are small enough that you can have the national team play in a major centre and have fans drawn from all around the country to the centre.

As for the attention? The issue isn’t the Blue Jays or the CFL or hockey off-season news dominating the headlines. It’s a case of soccer vs. soccer. How many Canadian-based soccer programs did you watch in the last week that spent more time talking about England’s starting 11 over Canada’s starting 11? How many highlight packages featured Euro 2012, and then just a mention of the Canada score? We see that BMO Field can sell out for Toronto FC (OK, maybe not this season) playing another MLS also-ran in a game that’s at a poorer caliber than a top-level NASL match. Before trying to turn this into an “us vs. Rogers and the Blue Jays” or an “us vs. the CFL and NHL and NBA” debate, we in Canada need to address our own soccer media. Too often, love of England trumps love of Canada.

And, really, it’s a shame that we need to spend so much time on a conference call talking about fans and where the team should play and what place Canada’s national soccer team should have in our lives. Yes, Hart did talk a bit about player selection… and that’s in the next story posted on the site.